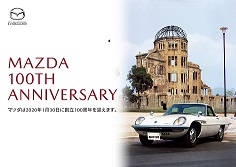 Mazda Motor Corporation, which represents the automobile industry, one of the key industries in Hiroshima Prefecture, will celebrate its 100th anniversary on January 30, 2020.
To commemorate this, the Hiroshima Brand Shop TAU will hold a “Mazda 100th Anniversary Panel Exhibition in TAU” from January 20 to February 19. We will display panels selling Mazda brand stories and display and sell official goods (MAZDA GOODS COLLECTION). 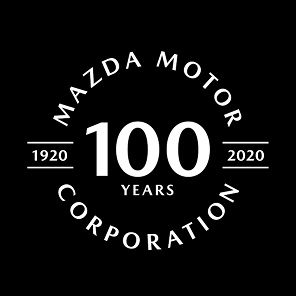 (※Reference information)
<Mazda Motor Corporation>
An automobile manufacturer founded on January 30, 1920, and has been operating mainly in Hiroshima and Yamaguchi until now. In 1931, the company started production of the company's first three-wheeled truck, the Mazda Go (DA), and in 1960 entered the four-wheel passenger car market with the R360 Coupe. Later, the company launched the Cosmo Sport equipped with a rotary engine, the Familia, which won the first Japan Car of the Year, and the Roadster, which has enthusiasts around the world. In the 2000s, we introduced a product group that embodies the brand DNA under the brand message of “Zoom-Zoom”. Currently, the company is launching cars full of driving pleasure, such as the MAZDA3 and CX-30, which employ SKYACTIV technology and Kodo Design. As of the end of March 2019, the company had about 50,000 employees and annual production volume of about 1.57 million units.