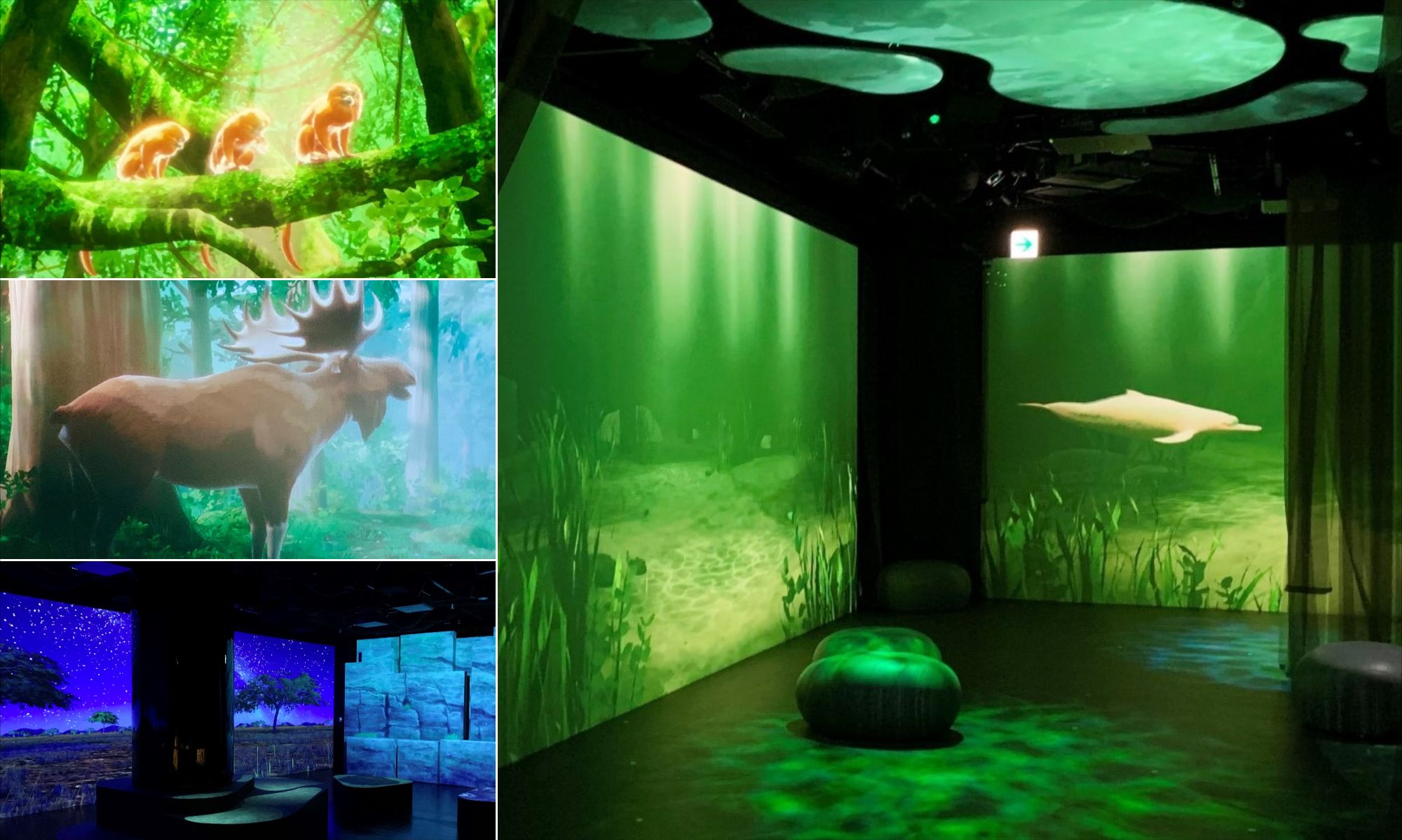 Since I have been interviewing this hot topic immediately, I will report on the state of the venue, how to enjoy exploration, points I noticed, etc.! 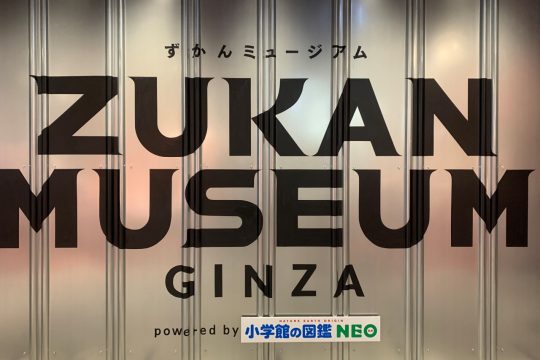 What kind of facility is "Zukan Museum Ginza"?

"Zukan Museum Ginza" explores the world where a wide variety of creatures picked up from the "Shogakukan Encyclopedia NEO" series, which has a cumulative circulation of more than 11 million copies, are visualized digitally, and explores the real ecosystem and nature. It is a facility where you can learn. 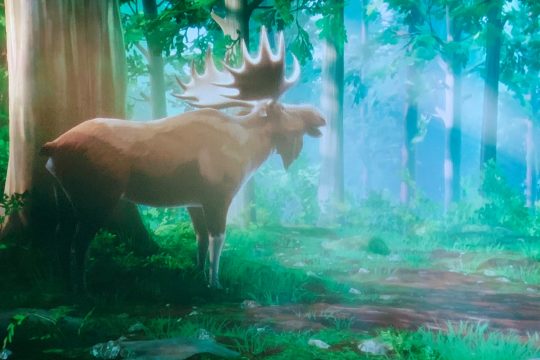 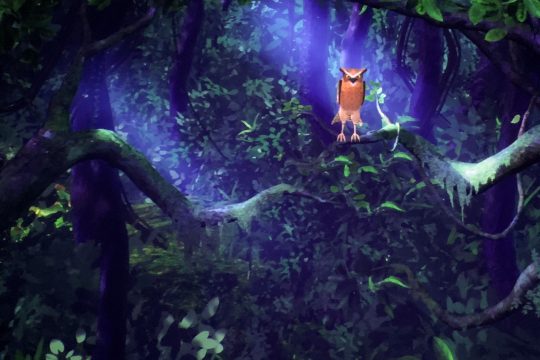 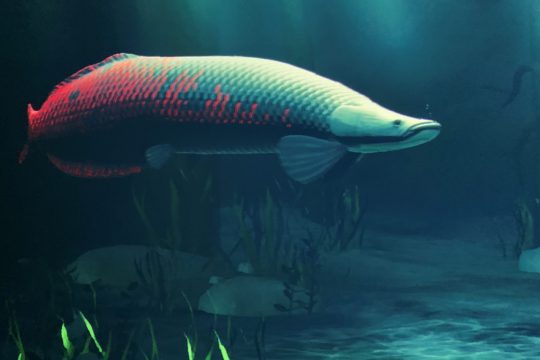 On the huge screen in the museum, under the supervision of the "Shogakukan Encyclopedia NEO" team with the concept of "telling the creatures themselves", the usual behavior of each creature and the movement when alert are reproduced with animation.

Southern tamandua, elk, armadillo lizard, Amazon river dolphin … While capturing the detailed characteristics of creatures realistically, the visual itself has a paint touch finish like an illustration, so even people who are not good at insects can enjoy it. .. 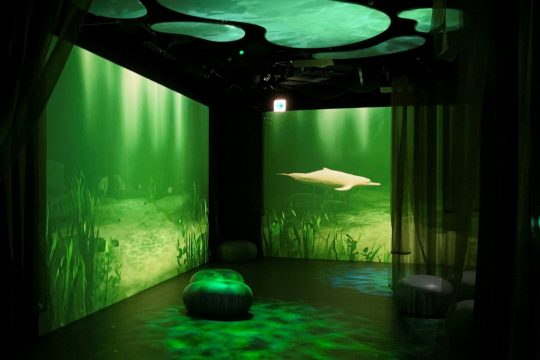 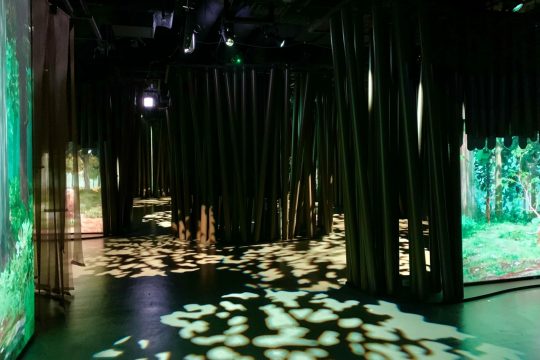 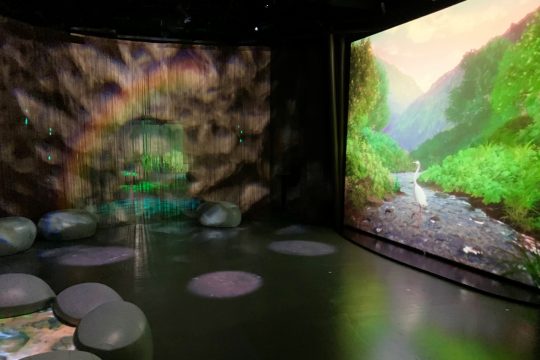 Reproduce the habitat of creatures such as forests, freshwater, riversides, grasslands and arid areas with screens and three-dimensional objects. It reduces the lighting to the minimum and enhances the immersive feeling of the audience.

Among them, the "Antview Zone" is an unusual space where you can explore the creatures found in thickets from the perspective of ants. When the insects took off, the wind blew and vibrated in the zone, and I was able to experience the feeling of an ant.

It gradually changes from morning to night. At night, every zone has a fantastic atmosphere.

The mechanism is to condense 24 hours a day into 24 minutes, and the scenery changes with the passage of time in the morning, noon, evening, and night, but it is surprising that the creatures that appear will change depending on the time of day! In other words, nocturnal creatures can only be observed at night.

Creatures often move and disappear from the screen, which can be frustrating for some, but it's also a spice that excites visitors' exploration. Let's enjoy the creatures living naturally.

Start exploring with "Stone of Memory"! 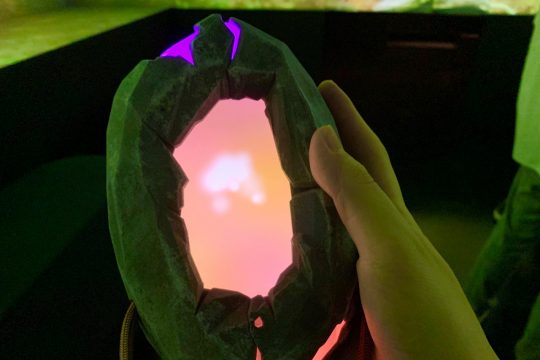 "Stone of memory" that changes to seven colors

By the way, "Zukan Museum Ginza" is a large facility that uses the entire floor of Tokyu Plaza Ginza, but in reality, there is no information board about which creatures will appear at which spots.

When you hear this, you may be worried that you have to look for it blindly, but don't worry. The navigation item that can be called the heart of exploration is the "stone of memory" in the image. (One piece can be rented per group. One piece can be added for 300 yen)

If you have a "stone of memory" with a mysterious power, you can detect the creatures that appear in the museum and record which creatures you encountered . It's rather heavy, but it's safe even for small children because it is guided to hang it diagonally on the body with the attached string. 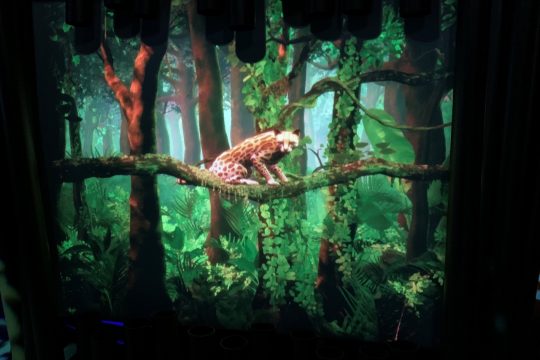 The "Record Stone" is easy to use, and when you first approach a creature, the following screen will be displayed. 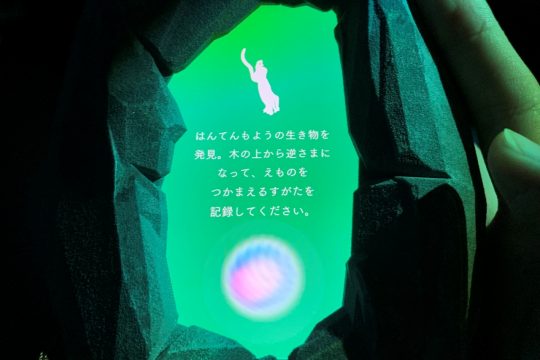 However, it is not OK if you find it, and you need to refer to the hints displayed on the screen in order to record the creatures. In the case of the image above, it says, "Turn upside down from the top of the tree and record how you catch the food." 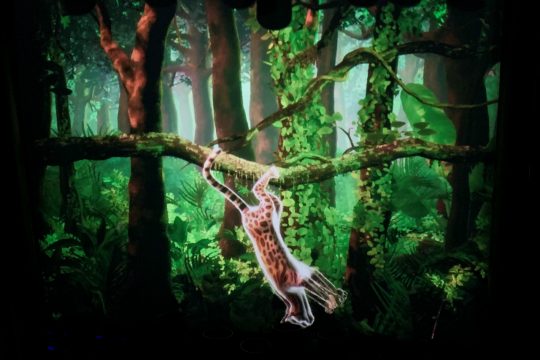 When I waited until it moved according to the hint, the creature's body glowed white. At this timing, I will touch the white circle on the screen. 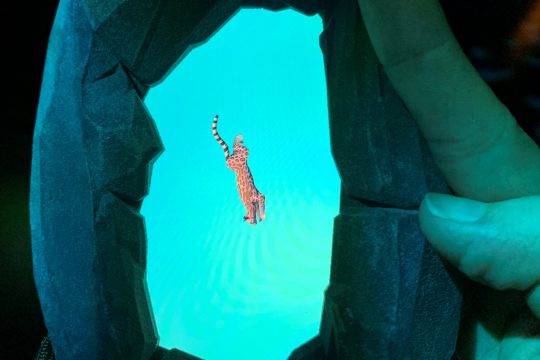 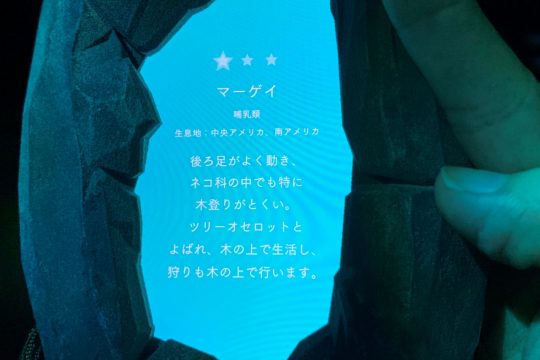 I understand the names and ecology of the creatures.

It was not until I touched the white circle at the right time that the creature was recorded on the "stone of record" that I was able to know its name, habitat, and ecology.

In this way, it is a facility where you can not only learn about the real ecosystem and nature of living things, but also collect and enjoy living things.

The hints displayed were interesting because there were many things that taught the individuality of the creatures, such as "the way parents watch over their children" and "the way the top and bottom are reversed".

By the way, the ★ mark at the top of the screen is the degree of rarity in the museum. Rarity was set from 1 to 3. (In the image, Margay's rarity seems to be 1, but this is because it was taken while it was being displayed, and it is actually rarity 2.)

The author was aiming for a comp of all creatures within the interview time. Immediately after I learned about the function of this "record stone", I was optimistic that "Well, it would be an easy victory if I had this", but I soon realized that it was surprisingly difficult to increase the number of records. 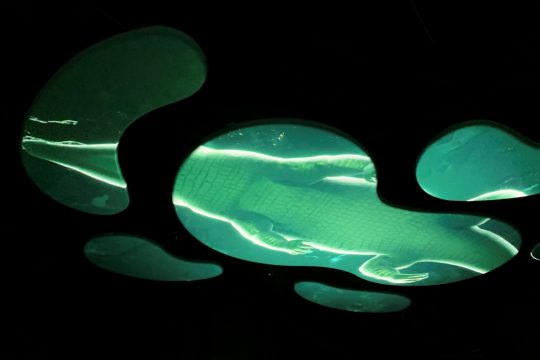 On the ceiling, the crocodile shows its stomach and is migrating leisurely 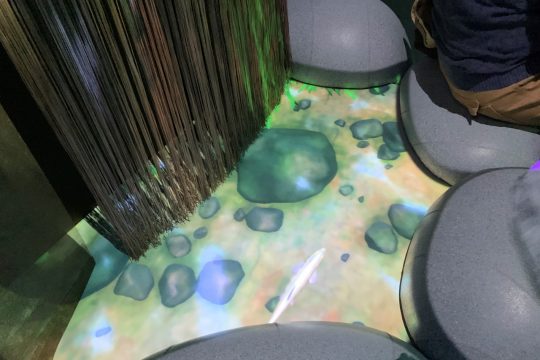 I think it's a lively image of an object …

The reason is that the creatures that appear depending on the time zone change as mentioned above, but if you get too close, the creatures will be alert and run away . In order not to waste your time, you have to keep a reasonable distance.

In addition to the huge screen, there are other creatures lurking in the miso . For example, in the ceiling, for example, in an object that I thought was just for a stool …

Even though I haven't seen the creatures, for some reason the "stone of record" responded and displayed hints, and I searched around the area with "Well, where are you?" figure. That's why the tension will explode when you can find it !!

It can be said that it is a perfect difficulty level for parents and children and friends to enjoy together.

Some creatures don't show up unless they are surprised. (What's a surprise …?) Of course, creatures with a rarity of 3 are set so that they can't be found easily, so people who don't like to lose may be addicted to it.

As a caveat, there was a scene where the "stone of record" stopped responding when I was in the same place for a certain period of time, probably to prevent it from getting in the way of other visitors. After spending a while in another place, it will react again, so please refer to it when you go to "Zukan Museum Ginza".

You can get one random card from the recorded creatures! 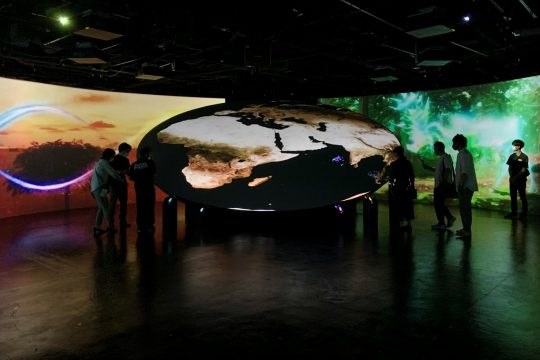 The final goal area that I arrived at while getting excited like this. A mysterious monitor is installed in the middle of the space surrounded by fantastic graphics.

When I set the "record stone" on the meaningful pedestal installed around the monitor, I arrived at a very beautiful ending where the creatures I recorded so far jumped out to the monitor. (Please check the ending screen with your own eyes) 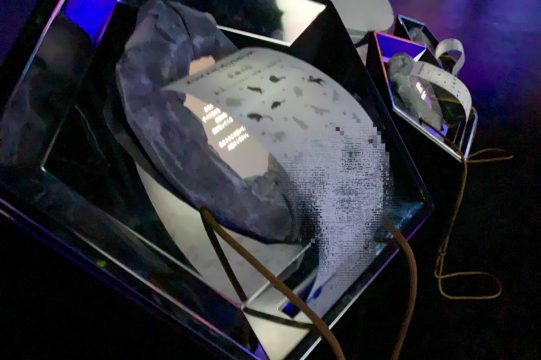 * A part of the paper is mosaic processed.

When the ending is over, a large receipt will be printed from the pedestal. This is called "proof of record" and tells you how many creatures you were able to record. I don't have all kinds of comps! It took about 40 minutes to record only about 60% of the total … I want to revenge again.

I got a Japanese long-eared bat card. Kimo is cute ~

If you look closely at the "proof of record", one of the animals you could record is marked with a circle. If you take this to the official store "memoria" outside the museum, you will get one card of the creature with a circle, so don't forget to get it. 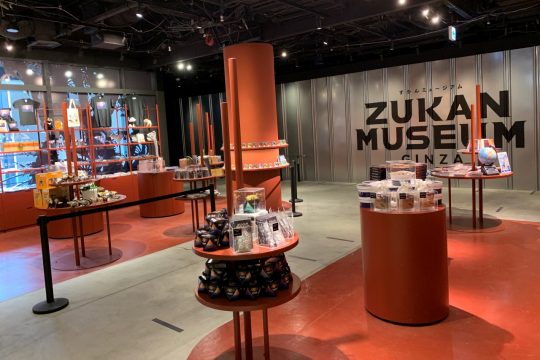 If you come here, children's interest in living things and nature will surely increase.

For adults, it is recommended that you sit on the objects that replace the chairs installed in various places and try to heal while watching the ever-changing scenery.

* The content of this article is as of the date of publication. 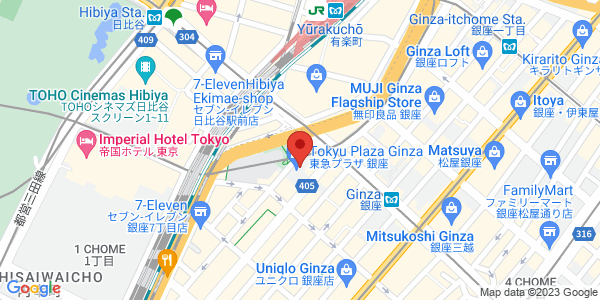