The Japanese-style fruit parlor "Seikado", which opened its first store in Ebisu in July 2021, will open "Ginza Seikado" as a flagship store with the finest fruits on Tuesday, September 28, 2021. Will open in. To commemorate the opening, we will prepare a dorayaki limited to 30 meals a day using 2 luxuriously 2 grains of Ishikawa Prefecture's highest peak grape "Ruby Roman" *, which was completed after spending 14 years. * It may end early due to the influence of weather.

Seikado is a Japanese-style fruit parlor that carefully selects and purchases high-class domestic brand fruits that are not generally distributed. "Ginza Seikado" will be born this time as a flagship store with the finest varieties. The signature menu of Seikado is fruit dorayaki with a new texture that overturns the conventional concept of dorayaki. The dorayaki has a thick but light texture that suppresses the dryness peculiar to dorayaki, and the powder with a unique composition realizes the Japanese texture that many people like. We have two types of "mochimochi".

At the Ginza store, we will prepare the highest peak grape "Ruby Roman" in Ishikawa prefecture, which was completed after spending 14 years to commemorate the opening, limited to 30 meals a day. "Ruby Roman" is a luxury brand with a maximum price of 1.4 million yen per bunch at the first auction in 2021, and when you put it in one mouth, abundant juice spreads in your mouth and it has a refreshing sweetness. Is a characteristic grape. We want our customers to easily enjoy high-quality fruits, so we have added "Mochimochi Ruby Roman", which uses two "Ruby Roman" for 30,000 yen each, to the popular "Mochimochi dough" at EBISU Seikado. We will prepare one for 1,000 yen.

Dorayaki, which has been loved by Japanese people for a long time, is a unique dorayaki that has a new sensation but is somewhat familiar by using seasonal fruits. It looks beautiful and has a lot of valuations, so it's a perfect souvenir, or a size that will satisfy even one piece, so it's a perfect reward for yourself. Open-only products will be on sale for 10 days from the opening date, so please drop in at this opportunity. 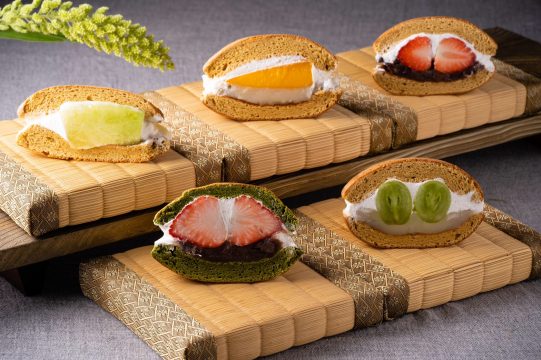 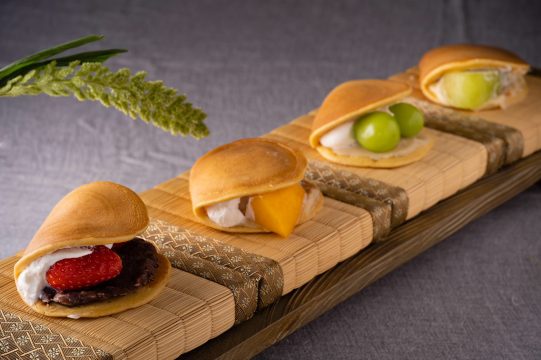 In the first auction in 2021, it is the highest quality grape with a price of 1.4 million yen per bunch. There are strict examination standards. The grapes that have cleared all of them are said to be the best varieties of large grapes "Ruby Roman" that Ishikawa Prefecture is proud of.
"Ruby Roman", which is called a jewel, is a grape with a refreshing sweetness that spreads abundant juice in the mouth when you put it in one mouth.
"Ruby Roman," which is the finest fruit in the fruit and vegetable hall, is made with the dorayaki "mochimochi dough," which is the pride of the fruit and vegetable hall, which took four months to develop, and is sweetened to maximize the sweetness of the fruit. White bean paste with a modest finish and brown sugar cream using brown sugar are combined so that you can feel the Japanese element.

Commitment POINT ① Luxury use of carefully selected high-class fruits <br /> Irwin has been given the titles of high-class strawberry brands "Crimson Misuzu" and "Sun Tamago" by the fruit wholesaler "Shimada Fruits and Vegetables", which has been in business for over 90 years. Carefully selected at the timing when you can taste the most delicious high-class fruits such as mango, which are not widely distributed.
Among the high-class fruits, professionals are connoisseurs of the "seasonal season", purchase the most delicious production areas and brands at that time, and provide the best taste when you come.

Commitment POINT ② Cream <br /> A craftsman with 20 years of pastry chef finely adjusts more than 10 types of cream base. Using brown sugar from Okinawa prefecture, it is finished in a gentle cream that does not destroy the taste.

POINT ③ Anko / Shiroan <br /> We are particular about organic farming and use organic JAS certified organic bean paste that does not use chemical fertilizers or pesticides. The sweetness is reduced so as not to spoil the flavor of the fruit, which is the main character, and the finish is smooth and gentle.

Commitment POINT ④ Dough <br /> "Moist" dough that suppresses the dryness peculiar to dorayaki, feels light while being thick, and sticks to the flavor of honey that comes out of the nose, it is completely used in conventional dorayaki dough We offer two types of "mochi-mochi" dough that achieves a unique texture using unfinished rice cake flour, shiratama-ko, etc. The dough has an excellent compatibility with fruits and creams.

I want to feel the blessed four seasons of Japan through food.
I want to spread the world-class domestic fruit and vegetable technology.
Aiming for the foundation of further evolution of traditional Japanese sweets and confectionery.

"Seikado" was born from this concept.
We hope that you will feel the four seasons of Japan and enjoy the fusion of 90 years of fruit and vegetable industry's commitment to domestic fruits and 40 years of confectionery industry's Japanese sweets technology.