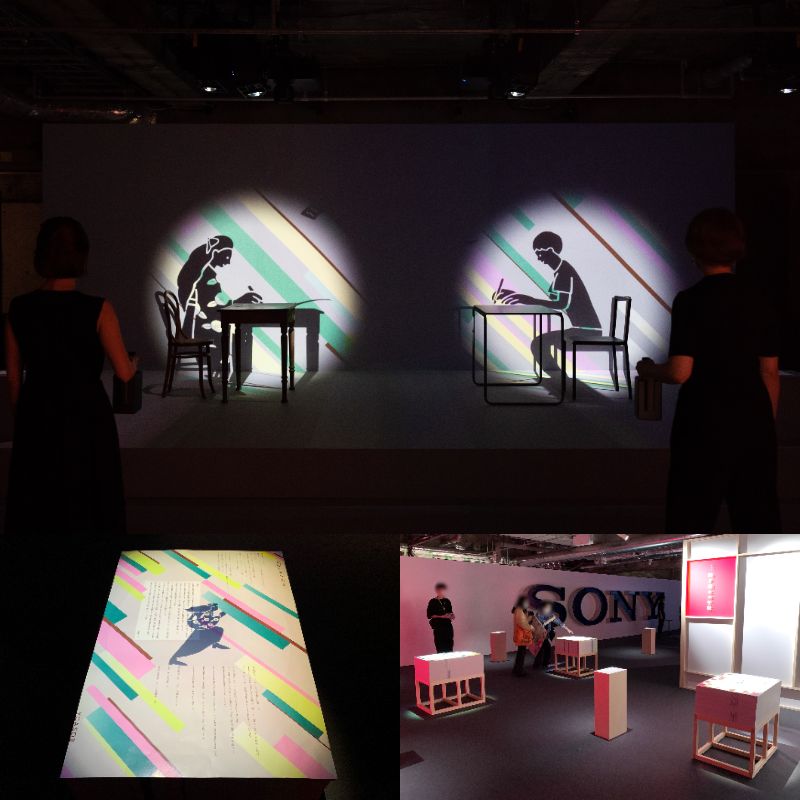 At Ginza Sony Park, from Thursday, September 2nd to Monday, September 13th, 2021, the fifth Sony Park exhibition with YOASOBI, a unit that makes science fiction music, as a collaborator. Bullet program "⑤ Semiconductor is SF. with YOASOBI ”is being held.

We covered this exhibition, which is the hottest of YOASOBI fans, who can enter the world of YOASOBI's new song "Taisho Roman" , which will be released on September 15, 2021 (Wednesday). !! 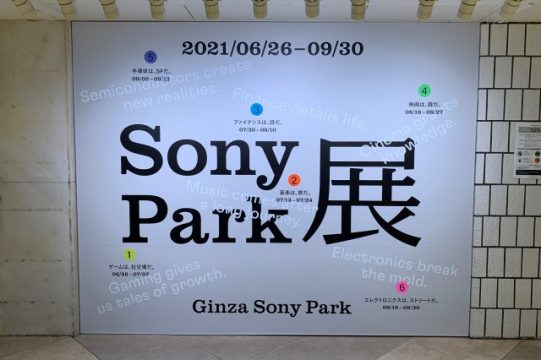 The Sony Park exhibition is the last event to take place at Ginza Sony Park before the start of construction work for the new Ginza Sony Park, which is scheduled to be completed in 2024. Collaboration with 6 groups of artists belonging to Sony Music Group under the theme of 6 fields "Game", "Music", "Finance", "Movie", "Semiconductor" and "Electronics" that Sony is currently working on. Starting in June 2021, many creative projects have been developed so far. 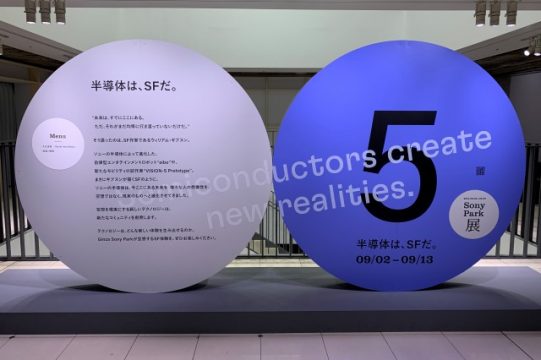 The 5th program "⑤ Semiconductor is science fiction," which started on the B2F of Ginza Sony Park from Thursday, September 2nd. In "with YOASOBI", YOASOBI, a unit that makes music from a novel by composer Ayase and vocalist ikura, has appeared.

The “chemical reaction between story and music”, in which novels of various genres become timely music through a sensor called YOASOBI and shake the hearts of many people, realizes the imagination and fantasy of various people. Like Sony's semiconductors, which continue to evolve into genres, it's also very SF-like.

With the keyword "SF", which is common to Ginza Sony Park, we are developing a program that utilizes Sony technology.

At the venue, it is a must-see event for YOASOBI fans , not only can you enjoy an interesting device that allows you to enter the world of correspondence beyond the 100 years of "Taisho Roman", but you can also listen to the full version of "Taisho Roman" earlier than anywhere else. !!

Then, I will introduce what kind of exhibition there is at the venue. 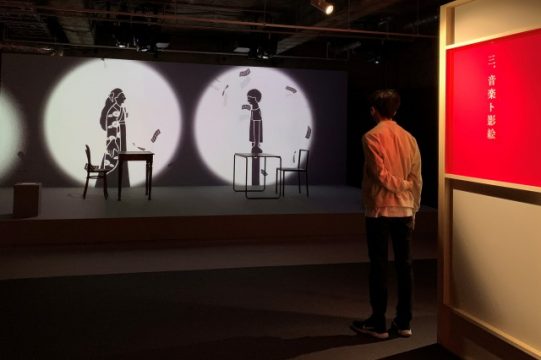 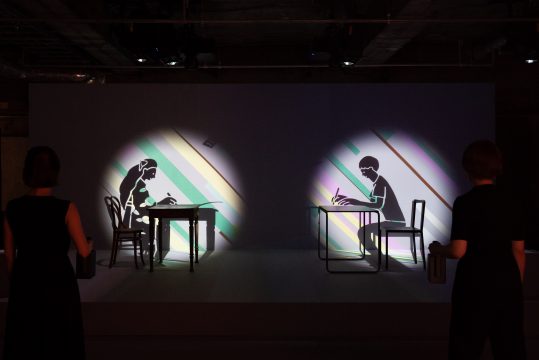 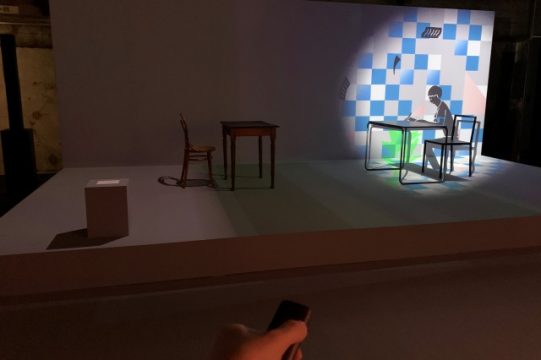 When you illuminate the wall with the lamp in your hand like this, the animation is displayed.

In the area of "Taisho Roman-NOVEL INTO MUSIC-", which is the main part of this exhibition, the 15-year-old hero of the original novel, Tokisho, and the heroine, Chiyoko, communicate with each other along with the full version of the song "Taisho Roman". Express the world of the story by following the animation of the shadow picture. Unlike music videos, this is an interactive, hands-on exhibition where visitors illuminate the wall with a special lamp and an animation emerges.

The ephemeral nature of such animation, which does not exist without illumination, conveys the atmosphere of love that was quietly nurtured between the two. I was impressed that the shadow play is a good production to express the relationship between Sho and Chiyoko, who have no choice but to imagine the other person by exchanging letters without knowing the face.

"Taisho Roman" is one of YOASOBI's songs that is particularly delicate and fresh. Ikura's clear singing voice, which has some sadness in its kindness, perfectly matches the atmosphere of the story of adolescent glitter and a little sad love, and the feeling of satisfaction after listening is in words. It wasn't enough … 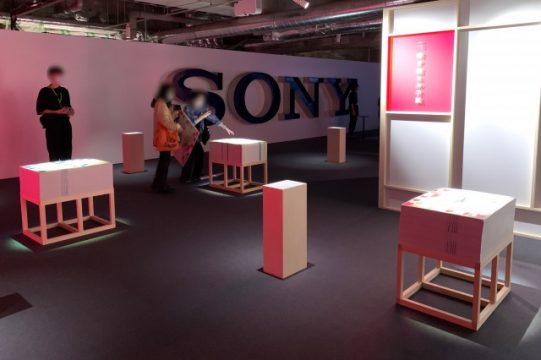 Of course, you can enjoy "Taisho Roman" more by listening to it after you know the original novel, but don't worry if you go to the event without knowing it. In front of the animation exhibition, there is a corner that introduces the exchange of letters between Tokisho and Chiyoko. 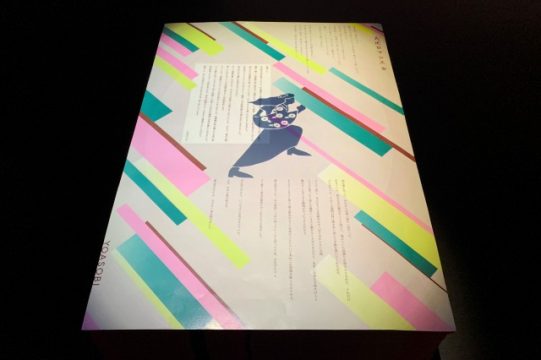 If you move the poster … 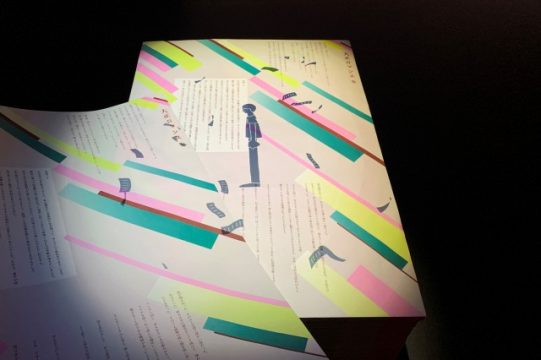 In the corner, there are three types of huge posters printed with the full text of the original novel, and there is also a small mechanism that the shadow picture projected on the surface changes when the poster is turned over. It's a short story that can be read in 10 minutes, so let's prepare the story before watching the animation.

By the way, you can take this poster home with you, but if you don't want to fold it, it will be quite bulky, so it's better to have a bag! 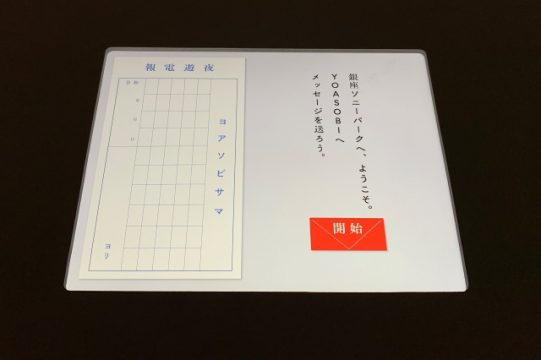 If you write a message to YOASOBI at the entrance of the venue, you will receive a reply later in the exhibition. 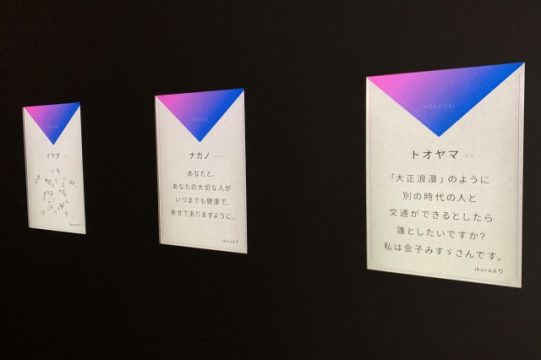 When you stand in the place where your name is displayed, a message from YOASOBI is displayed.

At the venue, there is also a corner named "Yoyu Heno Telegram" and "Yoyu Karano Flight", which are associated with the key items and letters of the story, where you can get a reply by name when you send a message to YOASOBI using a monitor. Responses from YOASOBI range from questions about "Taisho Roman" to messages to fans. I was very wondering how many variations there are. (I just glance at other people's replies)

There is a little distance between the place to send the message and the place where the reply is displayed, but it seems that the reply will remain displayed for about 30 minutes after sending, so you do not have to rush. 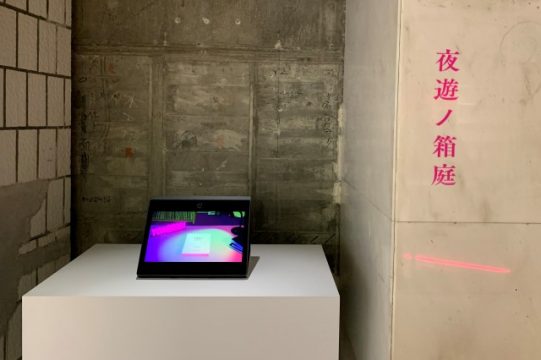 Also pay attention to Sony's Spatial Reality Display, which is entitled "Yayu no Hakoba" and makes 3DCG books appear in the space. With eye tracking technology that detects the line of sight of the viewer, you can enjoy a spatial image experience of turning the pages of a book and making characters stand out. I couldn't handle it well, probably because I was impatient because there was only one, but the book contained the thoughts of Ayase and ikura for this exhibition.

As mentioned above, although the scale is not large, it was a dense and fulfilling exhibition! Good news for those who cannot visit the venue during the period, but it is said that the live distribution of YouTube, where YOASOBI will introduce this exhibition in a tour format, will start from 20:30 on September 2, 2021 (Thursday). That thing. Delivery is from this page.

[September 2, 21:50 postscript] It seems that the archive of the video after the live distribution has ended is gone. (disappointing……!) 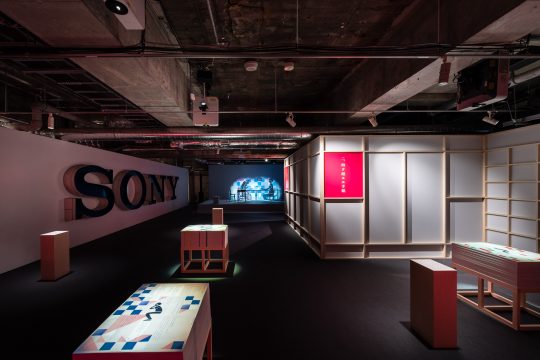 Prior to the distribution release, you can enjoy the full version song of "Taisho Roman" earlier than anywhere else. "⑤ Semiconductor is science fiction. "with YOASOBI" will be held until September 13, 2021 (Monday). Admission is free, but please note that advance reservations are required. (If there is a vacancy in the reservation frame, you can make a reservation on the same day.) For details, please check from the special website of the event.

In addition, "⑤ Semiconductor is SF. At the same time as "with YOASOBI", on the B3F of Ginza Sony Park, there is also a program called "ONE DAY, 2050 / Sci-Fi Prototyping" in which a Sony designer and four science fiction writers collaborated to depict "Tokyo in 2050". It is being deployed. Click here for details.

A trailer movie that depicts the future of people based on the "SF short story" created by a science fiction writer for each theme, setting four themes of "WELL-BEING", "HABITAT", "SENSE", and "LIFE". Screening. In addition, Sony designers propose services and products that are close to the world view of each theme. 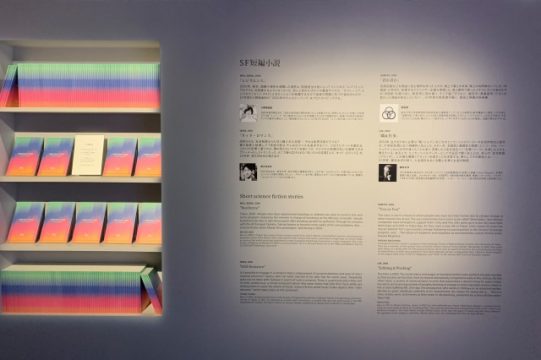 If you go to the venue, you can get a free booklet that summarizes the original science fiction short stories. 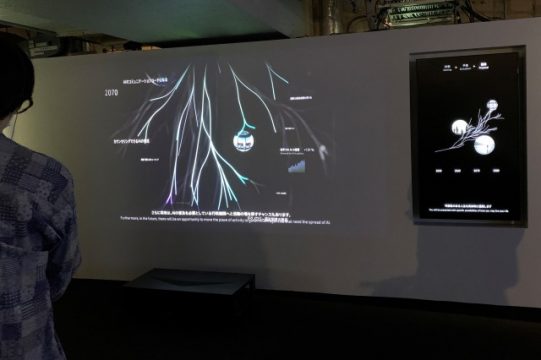 All of the fiction services and products featured in "ONE DAY, 2050 / Sci-Fi Prototyping".

For example, it is implemented in the near future, such as "Life Simulator", a service that "calculates all possibilities of a person from complex data of the past and present and presents a possible future". There are many exhibits filled with excitement and dreams, so even if you are not a science fiction fan, you should be able to enjoy it. Admission is free and admission is restricted, but advance reservations are not required, so feel free to visit.

* The contents of the exhibition may change depending on the status of the issuance of the new coronavirus infection emergency declaration.
* The content of the article is as of the time of the interview (2021/9/2).

<Related article>
Sony Park exhibition "⑤ Semiconductor is science fiction" that enters the "world of correspondence that transcends time and space" of YOASOBI's new song "Taisho Roman". 9/2 (Thursday) start | "ONE DAY, 2050" will be held at the same time

Sony Park Exhibition "② Music is a journey. 7/13 (Tuesday) Start | Tamio Okuda "Cantabile IN THE PARK" to release new songs / Music experience to listen to songs that feel like a "journey" selected by more than 130 groups of artists