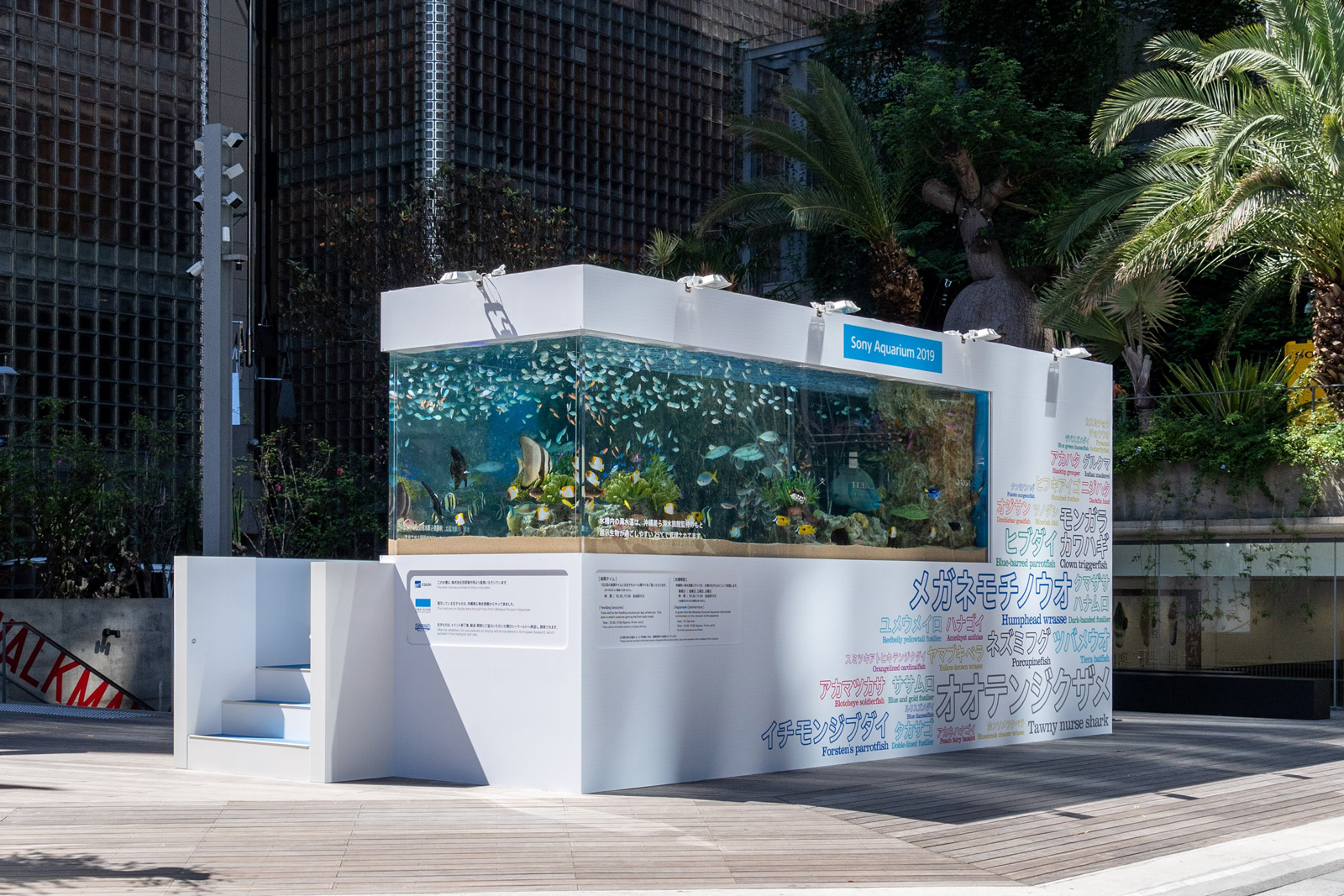 Ginza Sony Park, which offers a variety of playful experiential programs, has launched two new programs. Under the supervision of Okinawa Churaumi Aquarium “Sony Aquarium 2019” where colorful creatures of Okinawa Churaumi swim, and 29 glass sound speakers enter the pleasant sound and light “windandwindows” Windows ”Shota Hasunuma Full Fill × Ginza Sony Park. This is a program where you can feel cool during this summer season.
Along with the popular “# 009 WALKMAN IN THE PARK”, please enjoy the summer Ginza Sony Park where you can see, listen, touch, eat and learn. 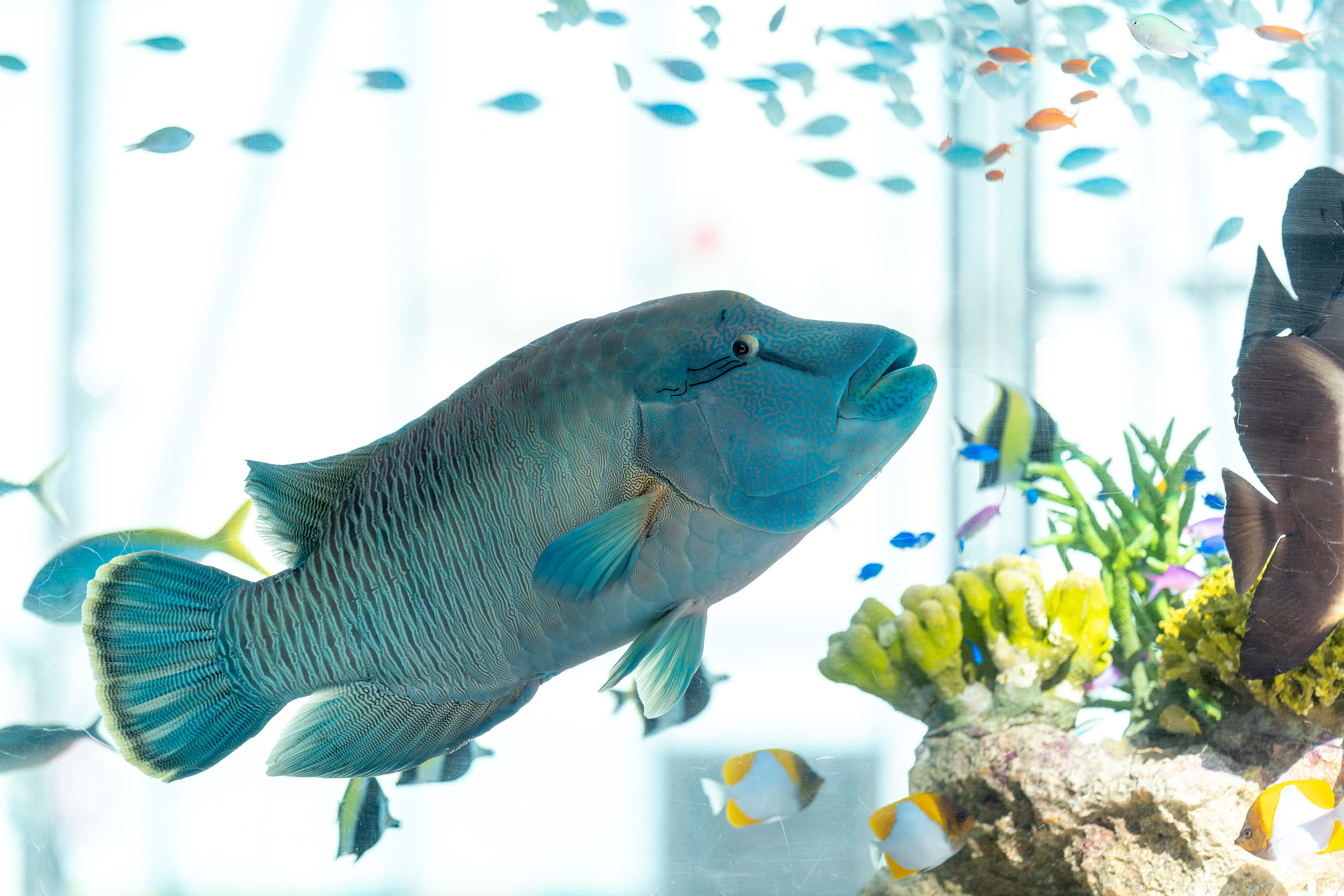 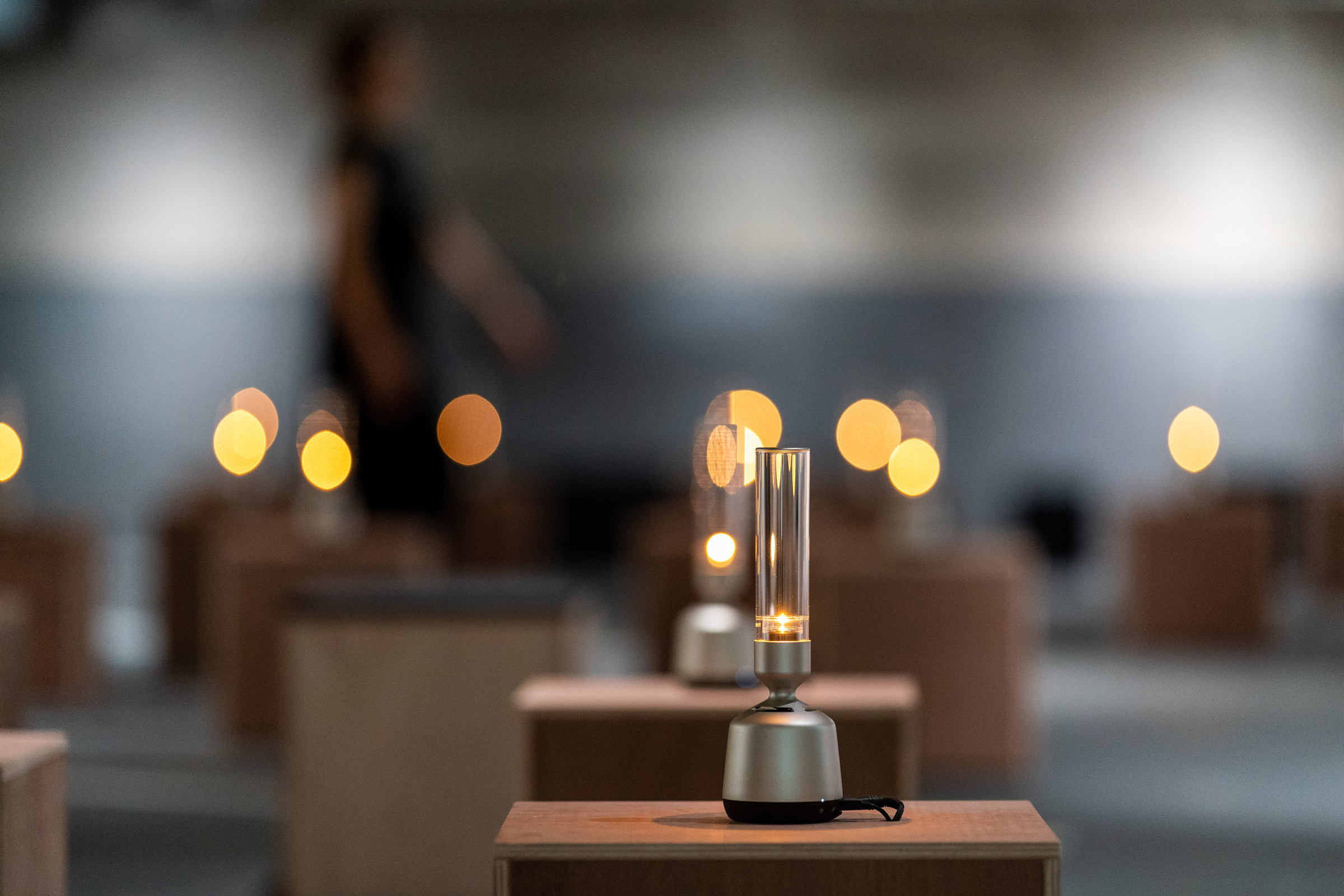 Ginza's summer feature “Sony Aquarium” has started this year. Colors that came from Okinawa's “Churaumi”, such as a spectacled shark that is known as the name of Napoleon Fish because the hump on the forehead looks like a Napoleon's hat, and a 1.2m long giant shark that was born at the Okinawa Churaumi Aquarium About 1,000 rich creatures of about 27 animals swim around in a large aquarium, creating a scenery that calls cool in the middle of the city. We have received favorable feedback from customers such as “I'm looking forward to it every year”, “I was glad to see the fish neatly”, and “It was fun to feed and explain the weekend”.

The large tank at Ginza Sony Park is lit up until 22:00 every day during the period. Please enjoy the fantastic large aquarium floating in the city lights, which is different from the daytime atmosphere with sparkling water.

An open college that invites celebrities and experts from various fields as instructors and guests. This time, in conjunction with "Sony Aquarium 2019", we will provide a place to create opportunities to deepen knowledge about the rich sea and sea creatures. We will continue to unravel the interesting content that both adults and children can enjoy.

In the 6th installment of “BENTO LAB”, a lunch box based on the concept of “making pairing with craft beer closer”, the specialty of Okinawan “Raw Tate Bento”. The rafte, which is made by simmering the thick cut pork belly over low heat, is so crumbled as soon as you put it in your mouth. The sweet and spicy flavor of the raft is condensed tightly.
In addition, we offer a limited amount of four types of deli made with ingredients unique to Okinawa, such as bitter gourd, island okra, mango, and passion fruit, created in a special collaboration with Sony Aquarium 2019. 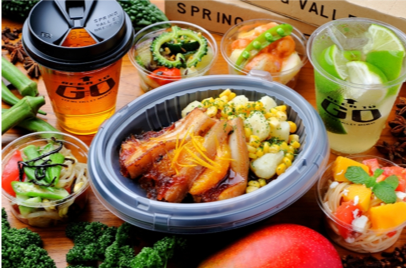 In addition, the subscription service “CLUB BTG” (starting on June 17th, limited to weekdays only, once a day, you can choose and drink your favorite craft beer (¥ 2,496 / month) includes “SOUR Citrus”. ) "Craft Beer is available from Thursday, August 1! It is a refreshing fruit beer with a fruity sudachi and kabosu and a refreshing citrus scent. (Normal order is also possible)

Plays different sounds from each speaker in an underground space where 32 speakers, a total of 32 speakers, including 29 LSPX-S2 Sony glass sound speakers that reproduce realistic sounds like live performances. Reproduce the live performances played by 26 people, “Shita Hasunuma Full Fill”. We offer a new music experience that “gets into music”. 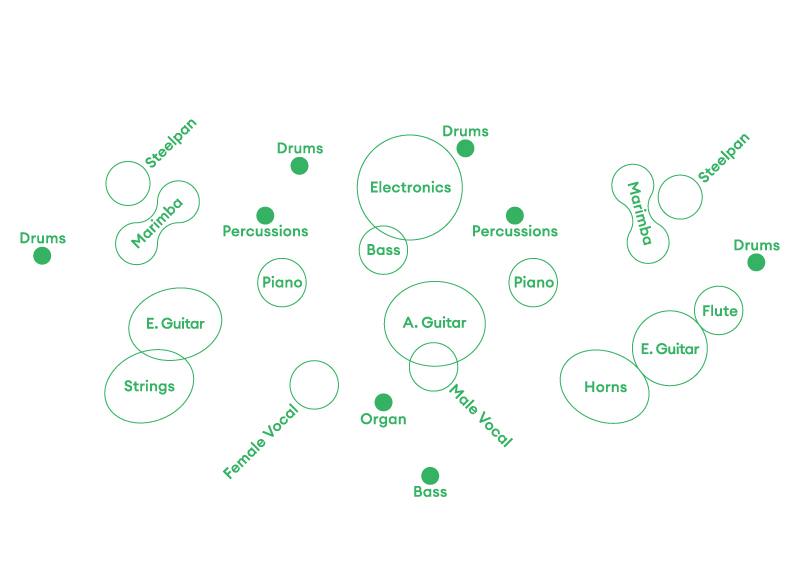 Surrounded by the pleasant light and sound of a glass sound speaker, you can enjoy a special time that can only be experienced here, where the sound spread and the way you listen to the music change depending on the listening position. While sitting on the bench, take a break, surrounded by multiple layers of full-fill sounds, or move to a place of instruments that can be heard far away and listen. Some people say that they have a luxurious feeling that they are playing around themselves, that they look cool and can rest a lot, and that they enjoyed experiencing new music spaces. Please experience how to enjoy new music.

40 years since the day when music began to walk. “# 009 WALKMAN IN THE PARK” continues to be popular with programs that focus on the “people” that Walkman has always been with.
“My Story, My Walkman” is an episode of 40 celebrities that you can listen to and enjoy on the Walkman that was released that year. The experience that you can actually touch and listen to the Walkman at that time has been well received by those who used the Walkman and children who first touched the Walkman for the first time, and also a chance to remember your own “ My Story '' It has become. The Walkman Wall on the 4th basement floor has about 230 Walkmans that have evolved with changes in media, such as cassettes, MDs, and CDs, and is a popular photo spot along with the Big Walkman on the ground floor. Collecting. Please come by all means.

Collect 4 stamps at the stamp rally in the park and you will receive a Walkman 40th anniversary logo sticker. (Ends as soon as it is gone. Once a day)

* The 40th anniversary booklet has been discontinued because it has reached the planned quantity due to its popularity.

The second custom walkman artist on the B1 / B1 floor is designer Temoto Nomoto. The exhibition started on August 1 (Thursday). 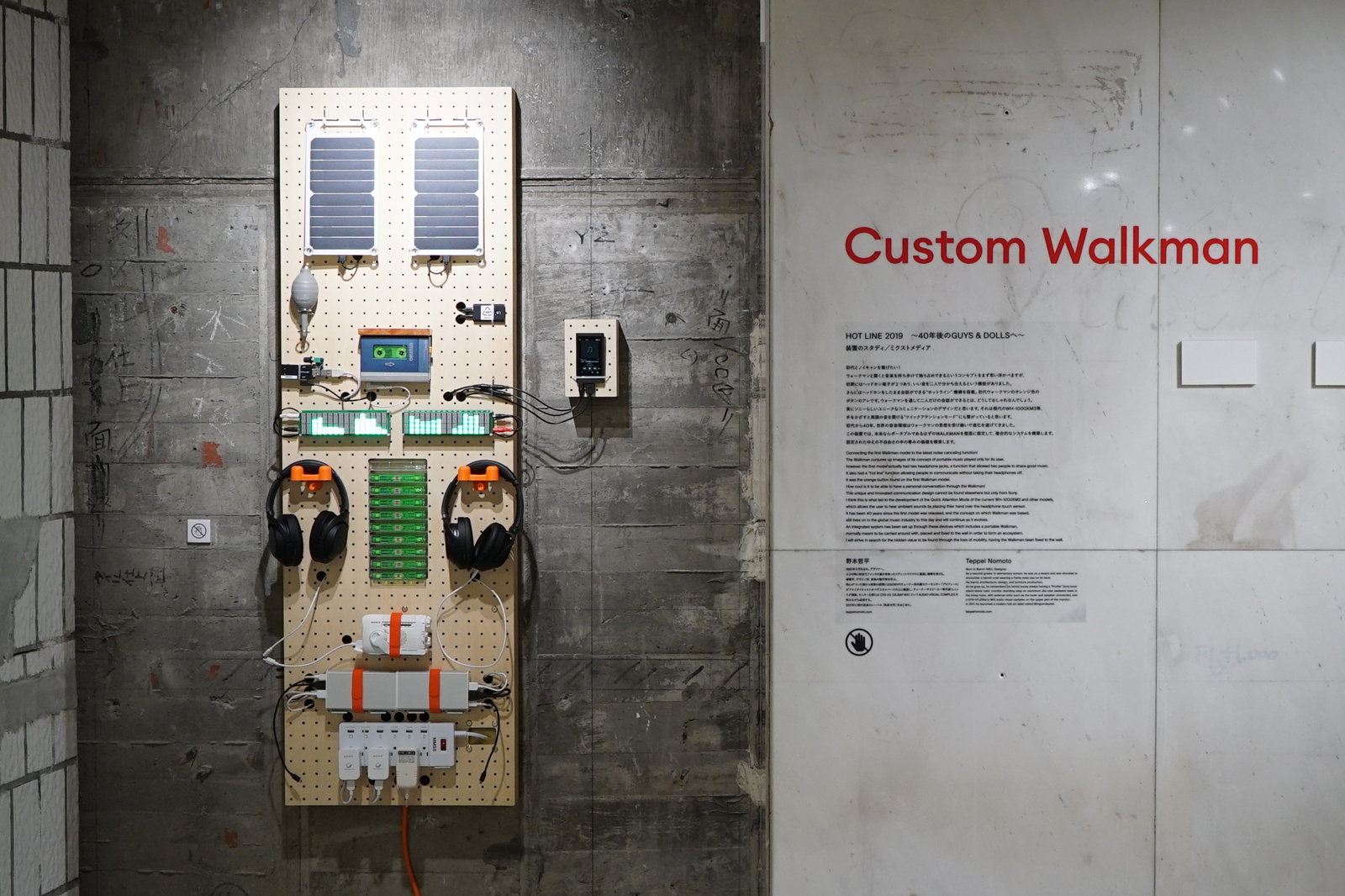 <Profile of Teppei Nomoto>
Born in March 1980. designer. At the time of small 2, she encounters an edit hermit crab carrying a Fanta lid on a sandy beach and is shocked. Studied architecture, design, and furniture production. Sony ’s non-built-in color monitor “Profile” sits on an aluminum die-cast pedestal base, and external units such as tuners and speakers are connected, and the upper part of the monitor is CFS-V3. Growing up worshiping AUDIO VISUAL COMPLEX (ZILBAP MX). In 2011, he started the label of modern folk crafts, “Mingu Kihira”.
http://teppeinomoto.com/

・ "Traya Cafe / An Stand" Pop-up Store "An Paste Shaved Ice and Shiratama Go [Ichigo and Matcha]" (PARK GL / Ground Floor)
The pop-up store of “Traya Cafe Ann Stand”, which appears on the ground floor until Sunday, September 1, sells a limited-time menu in collaboration with “# 009 WALKMAN IN THE PARK”. 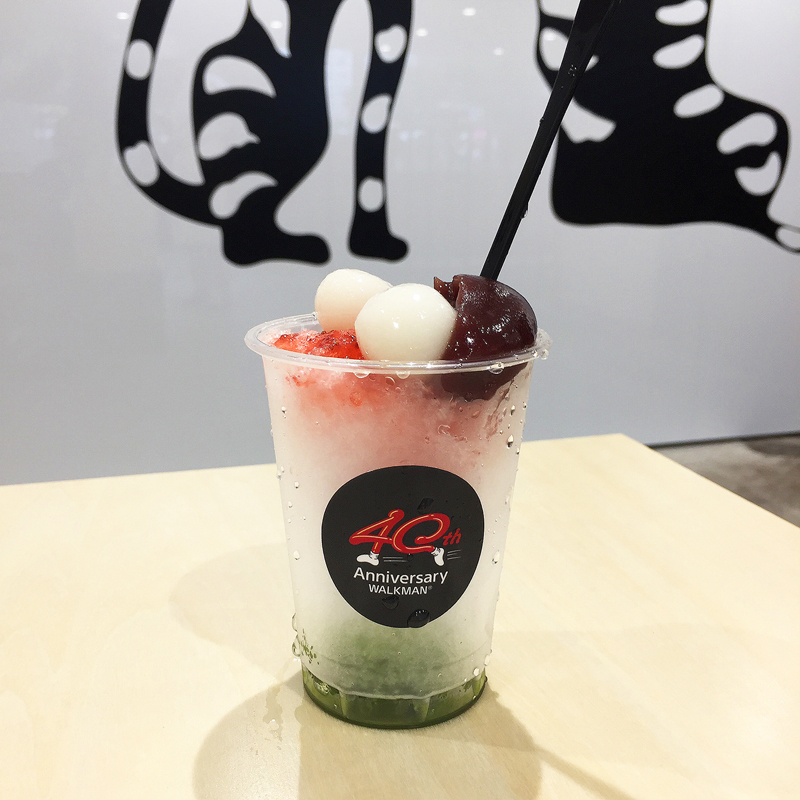 From August 1st (Thursday), An paste shaved ice and Shiratama mochi [Strawberry Matcha] will be introduced. This product, topped with a white ball and a Walkman 40th Anniversary logo sticker, is only available for 20 meals a day.
The sweetness of an paste, sweet and sour "strawberry" using Amaou and classic "Matcha", a luxurious dish that combines two types of honey. The refreshing taste of shaved ice is perfect for cooling down your body.

[About Ginza Sony Park Project]
Ginza Sony Park (Ginza Sony Park) has inherited the concept of “facility open to the city” from the beginning of the establishment of the former Sony Building, and as an experimental park in the city for a limited time until the fall of 2020, Throughout the year, various hands-on events where you can feel surprise and playfulness, and programs such as live performances. Since its opening on August 9, last year, more than 3.45 million (*) customers have visited the park. * As of June 30, 2019 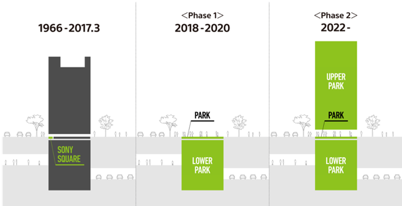