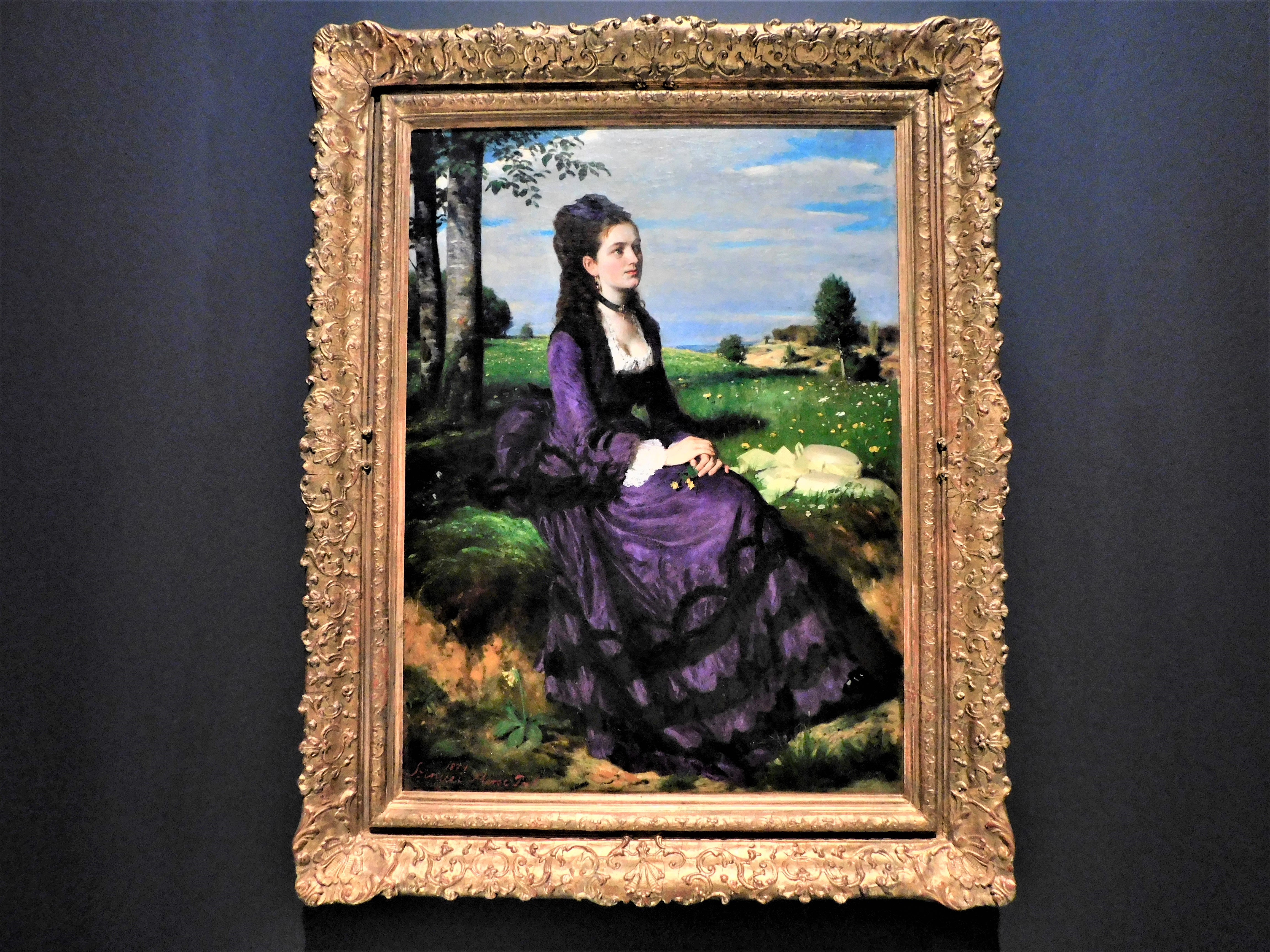 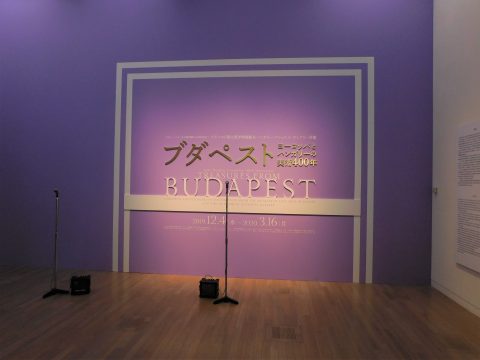 From Wednesday, December 4, 2019, at the National Art Center, Roppongi, Tokyo, "The 150th Anniversary of Hungarian Foreign Relations in Japan Budapest National Museum of Western Art & Hungarian National Gallery Budapest-European and Hungarian Art 400 Year " is held. (Until March 16, 2020)
The other day, there was a press preview prior to the event, so we will report on the situation.
Budapest-400 and 400 years of European and Hungarian art, highlights and highlights.

"Budapest-400 Years of European and Hungarian Art" is a collection of selected collections of the Budapest National Museum of Western Art and the Hungarian National Gallery commemorating the 150th anniversary of the opening of diplomatic relations between Japan and Hungary.

Budapest National Museum of Western Art opened in 1906.
Many of the original works of the collection originated from Hungarian nobles such as the Esterhaji family, and they kept together European art including Hungary.

The Hungarian National Gallery was opened in 1957.
As an institution dedicated to Hungarian art, Hungarian art that had been held by the National Museum of Western Art, Budapest was transferred to the gallery step by step.


The Budapest National Museum of Western Art and the Hungarian National Gallery were merged into one organization in 2012, and the reorganization of the collection field is ongoing.
The National Museum of Western Art, Budapest, as of 2019, houses Greek, Roman and Egyptian antiquities and European and Hungarian art from the late Middle Ages to the end of the 18th century.
The Hungarian National Gallery also displays Hungarian art since the 19th century and works from around the world since the 19th century.

There are three highlights of the exhibition.

The last exhibition of the collections of the National Museum of Western Art in Budapest and the Hungarian National Gallery was held in 1994.
This year of 2019 marks the 150th anniversary of the establishment of diplomatic relations between Japan and Hungary (at that time Austria-Hungarian Double Empire) signed in 1869 with the Treaty of Good Commercial Trade.
In commemoration of the milestone year, the collection exhibitions of both pavilions will be realized in Japan for the first time in 25 years.

The exhibition will feature 130 paintings, sculptures, and drawings that color the history of Western art for about 400 years.
From the 16th century renaissance to the early 20th century avant-garde era.
Writers range from the northern Renaissance master Lucas Cranach (father) to El Greco, Titian, Tiepolo, Monet, Renoir, Courbet, and Kurt Schwitters, an avant-garde artist of the early 20th century.
You can enjoy the masterpieces of artists representing each era.

③ Masterpieces of modern Hungarian paintings in one place

From the 19th century to the beginning of the 20th century, the momentum of nationalism increased in Hungary, and the field of art and cultural activities was extremely active.
This exhibition includes today's most beloved masterpiece in Hungary, «Ladies in Purple Dresses», Signier Mersche Pearl,
Navigator Ripple-Ronay Jozef, Munchah Mihai, an internationally active artist based in Paris, symbolist genius Chontovari Kostka Tivadar, end-of-the-century master Vasari Ya 35 masterpieces of modern art artists such as Nosh will be exhibited.
In Japan, it is a valuable opportunity to touch Hangari-modern paintings that are hard to see.

♦ The composition of the exhibition is as shown in the table below.

Chapter 1 From the Renaissance to the 18th Century

Here are some of the works that the editorial department has paid attention to.

A work by Signey Mercier Pearl, who played a pioneering role in modern Hungarian painting from the late 19th century to the early 20th century.
The wife of the purple dress is modeled after her beautiful married wife, Jophia.
The purple dress that Mrs. is wearing is vivid, far exceeding the beauty of the bright green and yellow grasslands.
If you find this painting at the venue, you will be drawn in and stop. 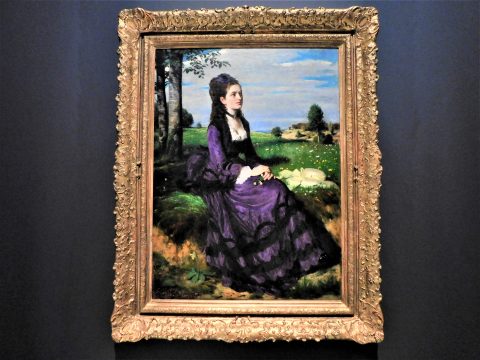 This is the work of Lucas Kranach (Father), the painter representing the German Renaissance, who gained fame as a court painter of the Saxon Elector
An old man touching the body of a beautiful young woman.
On the other hand, a woman reaches for the old man's pocket and tries to steal his wallet.
It expresses the filthyness of men and the sly wisdom of women. 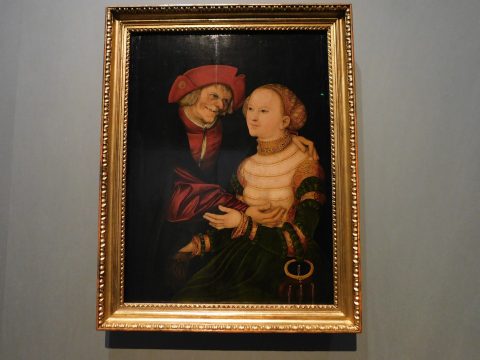 This is also the work of Lucas Kranach (Father).
An old woman who wants to hold the hand of a young man is giving money to attract the man.
On the other hand, the young man turns his hand to his shoulder and looks at the old woman with a cold expression.
Ironically that love cannot be bought with money.
Compare the relationship and expressions of different men and women with the previously mentioned "Unbalanced couple old man and young woman". 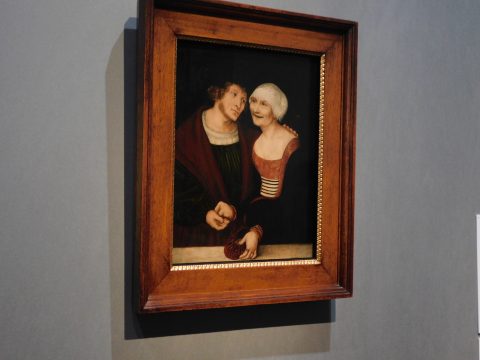 A work by Johann Baptist Writer who studied at the Vienna Academy of Fine Arts, taught by painters Leopold Couperviser and Thomas Ender and blossomed their talents.
A girl who holds a shining little jewel in the light.
I am staring at the dazzling light with surprise.
You may be seeing the world hundreds of millions of light years away while feeling that light in your small eyes. 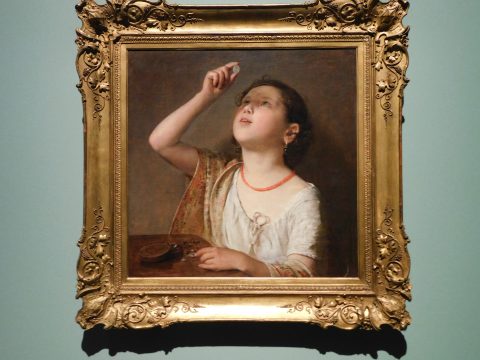 A painting by Barabers Microche, a painter from Transylvania who studied at the Vienna School of Fine Arts and continued his studies in Venice.
The expression of an elegant woman holding a message pigeon is very soft and clear.
Women's white skin, dress white, carrier pigeon white, all white look noble. 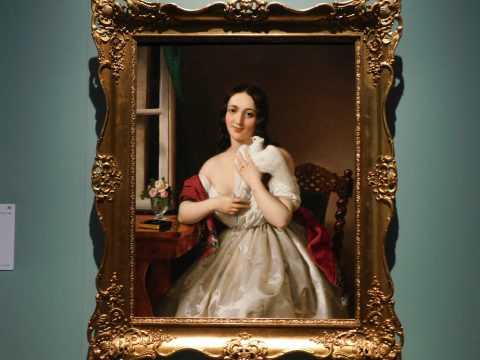 A work by Franz Xaver Messerschmitt, a writer who was a professor at the Vienna Academy of Fine Arts.
This work was one of the "head images of personality expression", which was a traditional portrait sculpture during the time of teaching, but gradually became ill and became devoted to work after leaving the job.
The eyes and neck wrinkles of the yawning person are very realistic.
It is said that the work with such a facial expression was made to treat the delusion that afflicted me. 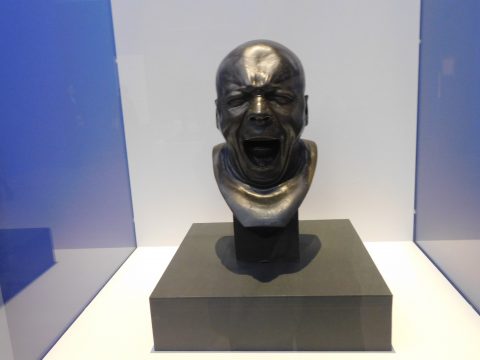 It is the work of Marco Carroy (father) who was a reformer of Hungarian landscape painting in the 19th century.
A fisherman and his wives who take a boat and talk to them.
The dazzling golden light is breathtaking and gives life to the fishermen. 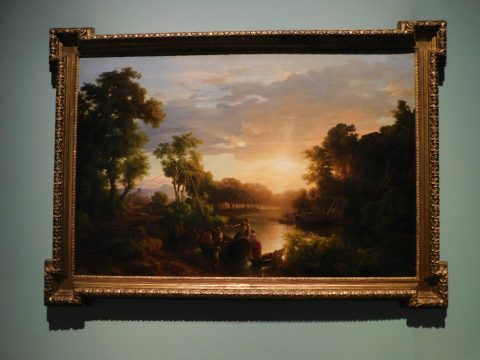 "Budapest-400 years of European and Hungarian art" I have reported on a press preview.
There is an opportunity to get to know Budapest's National Museum of Western Art and the Hungarian National Gallery's numerous works of art that have come to Japan for the first time in 25 years, and there is an enthusiastic gaze at those who do not want to miss a single work. did.
With all 130 items on display, I would like to go back to my work more than once, and keep the work in memory.
There are many other wonderful works besides the ones introduced, so why not take a look at the National Art Center, Tokyo?
If you miss this opportunity, you will not know when you will see it next time! 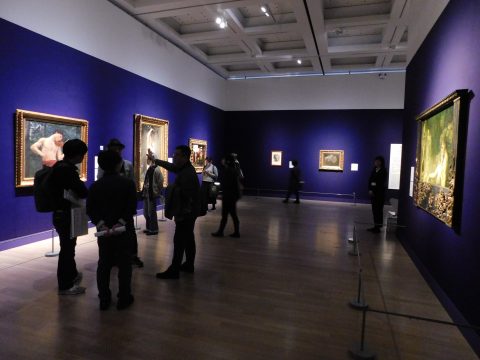 ・ Admission is free for those with a disability certificate (including one attendant).

･ Group tickets are sold only at the National Art Center, Tokyo (group charges apply for more than 20 people).

[Admission ticket with audio guide] (sold only with 7 tickets)

・ Students and faculty members of universities, etc., who belong to the National Museum of Art Campus Members can view this exhibition at a group fee.

･ For other discounts and other advantageous information, please see < https://www.nact.jp/information/profit >.