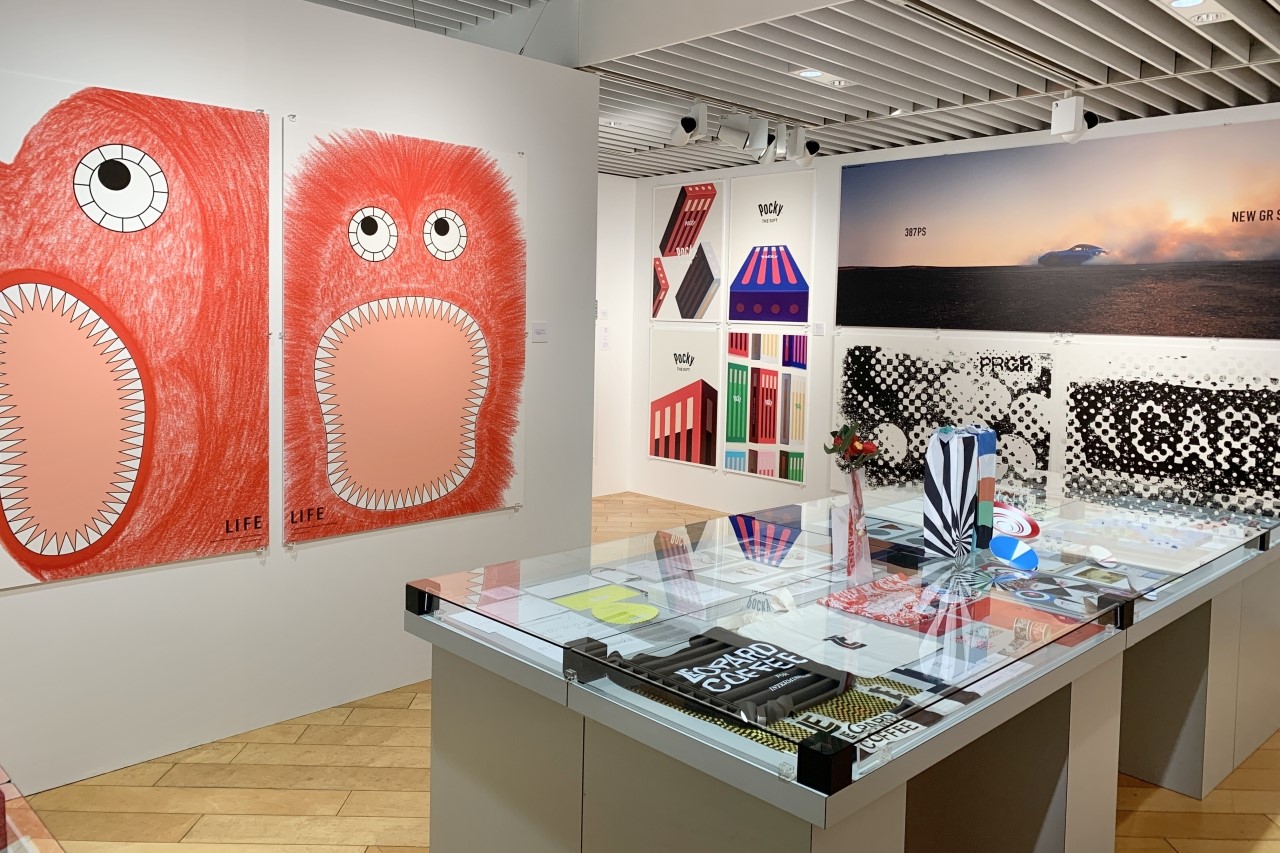 From November 1st to 30th, 2021, "Japanese Art Direction Exhibition 2020-2021" is being held in Ginza, Tokyo, where you can get a bird's-eye view of Japan's cutting-edge advertising and graphic design.

There are two venues, Ginza Graphic Gallery and Creation Gallery G8. I visited this exhibition, which is free to enter and photography is OK.

Is it really enjoyable for amateurs who are completely amateurs in advertising and design to go to Koopa Troopa? We will introduce the venue and the works that were interesting. 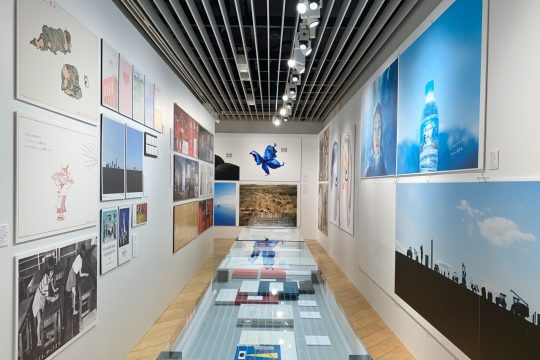 Introducing excellent advertising and graphic works selected from about 10,000 entries for 2 years!

The "Japanese Art Direction Exhibition" is an art director that constitutes the "ADC (Tokyo Art Directors Club)", which was established in 1952 with the aim of socially establishing and promoting the professional profession of art directors once a year. This is a public exhibition in which members such as the above judge and select excellent works. This exhibition was held for the first time in two years because the event was postponed last year due to the influence of COVID-19.

The subjects of the examination were TV commercials, posters, newspapers, magazines, WEB pages, product packages, etc. announced, used, and published in Japan during the two years from May 2019 to April 2021. About 10,000 entries have been submitted!

A total of 81 ADC members are exhibiting 18 award-winning works and excellent works selected after strict examination. 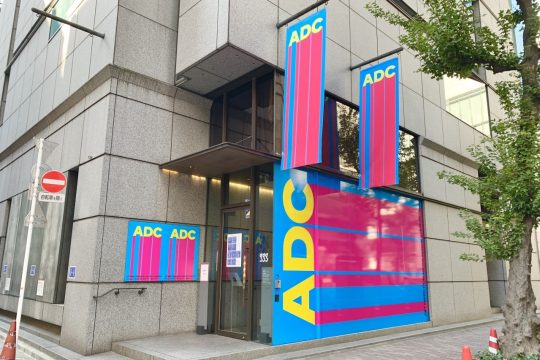 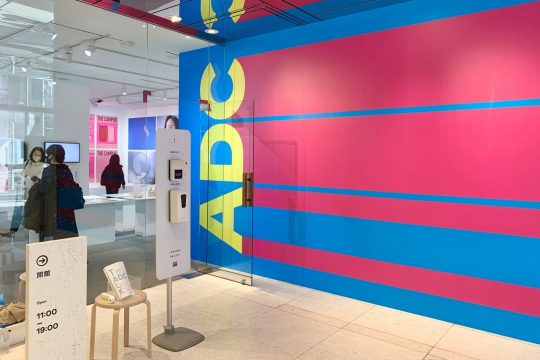 This is art direction! Works too. Ginza Graphic Gallery 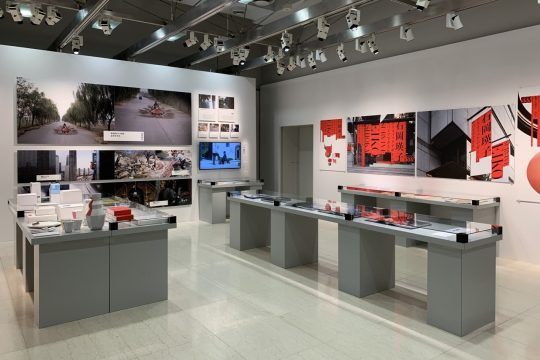 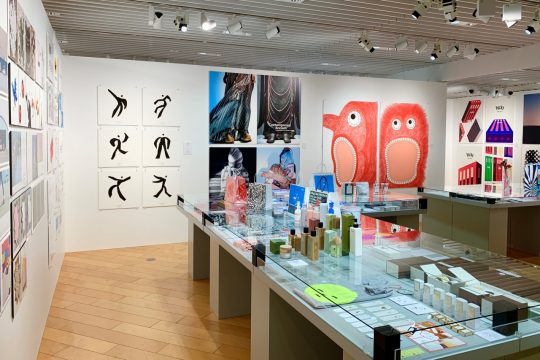 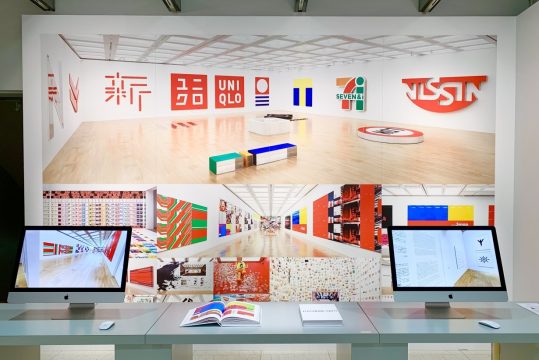 At the venue, you can see the VR of the venue scenery of the "Kashiwa Sato Exhibition" currently open to the public on the Internet. It's an exhibition with a perfection that the words overwhelming and overwhelming are appropriate, so if you haven't seen it before, please do!

The author of the first viewing of the "Japanese Art Direction Exhibition" was first surprised that the environmental space was also subject to examination.

Kashiwa Sato is known for his brand strategy and creative direction for famous companies such as UNIQLO, Rakuten, and Seven-Eleven. "Kashiwa Sato Exhibition" is an exhibition that he himself curated and introduced, rather than just arranging the history of his activities over about 30 years in the order of activities. With an exhibition structure that is familiar to our culture and daily life, the power of design that is not specially conscious, and its influence can be shown and enjoyed by anyone, especially the logos of many famous companies are huge objects. In addition, the novel attempt to make it be appreciated as an art work by developing it as an installation has become popular on SNS.

It is interesting that the exhibition itself, which shows the artwork, wins the artwork award. The Grand Prix award is convincing because it is an exhibition that truly embodies the purpose of ADC's activities, which is to convey the appeal of art direction work to many people! 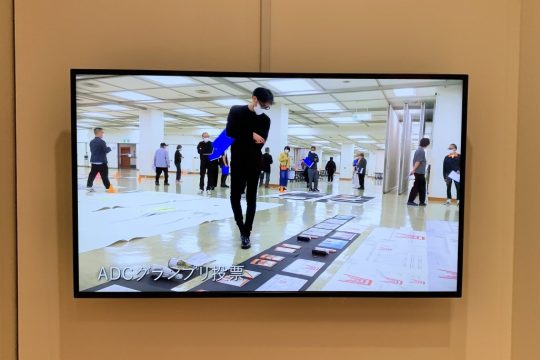 You can check the state of the judging committee, such as voting for the Grand Prix selection, on the monitor at the venue. 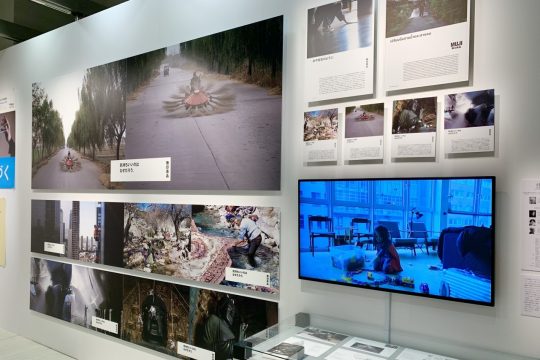 The essence of human beings may be hidden in the universal activity of humankind called "cleaning." The scenes of cleaning more than 100 places in the world that appear in the work were taken with the idea that MUJI's quest for pleasant lifestyles and social hints could be seen there. There is no product promotion on the commercial film, just quietly washing in the river, cleaning the floor in the temple, cleaning the windows of the building, etc.

It seems that the shooting was done before the COVID-19 epidemic, but this video was released in August 2020. In the video released at the time when the fierceness of COVID-19 struck Japan and all "natural" was no longer "natural", some people said that the appearance of the ordinary person's activities was more adorable than anything else. Then.

In terms of video works, the "Video of the Japanese Olympic Committee" Shadows as Athlretes "", which also won the ADC Member Award, is also worth seeing. (This was prohibited from shooting)

This work mainly captures the shadows of athletes who perform competitions such as fencing and rhythmic gymnastics. The thing. Despite the limited information of shadows, the beauty of the movement of the body can be felt more frankly than looking at the body, and mysteriously hot things come up in my chest. 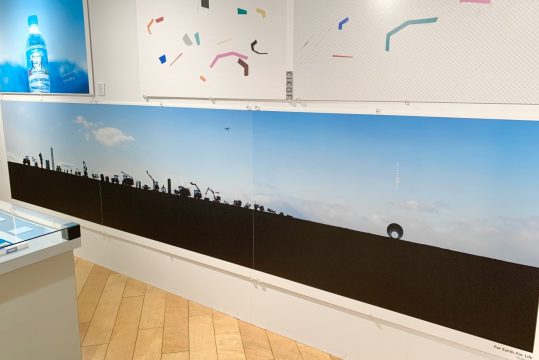 It's a shadow (silhouette) connection, but I liked the advertisement for "kubota 130th Anniversary" and stopped and watched it for a long time. "What was it born for?" "For the earth, for the lives of people.", Which conveys the significance and mission of Kubota, which has celebrated its 130th anniversary. The ambition and history inherited by more than 10,000 of the company's products is simply expressed in the silhouette of the product against the blue sky, and I imagined that the confidence and love for the product is in the air. ..

There are many unique works. Creation Gallery G8 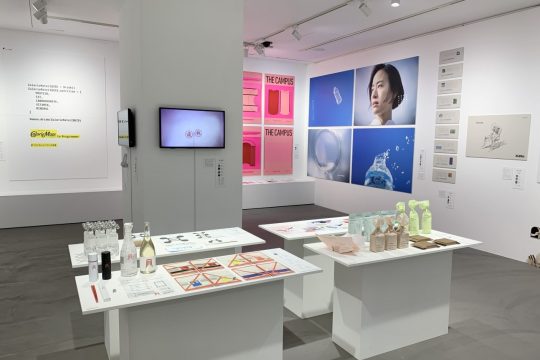 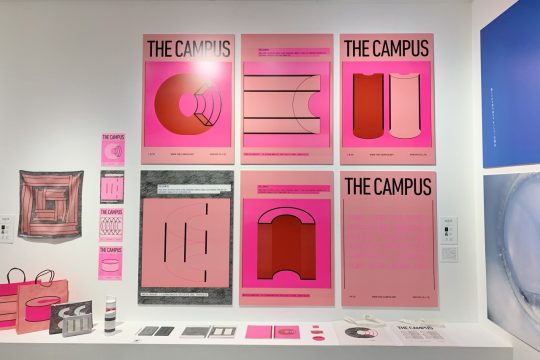 "KOKUYO" THE CAMPUS "Poster, General Graphic" (ADC Award winning work) that visualizes the image of "THE CAMPUS", an experimental site for working styles, where diverse values continue to change. 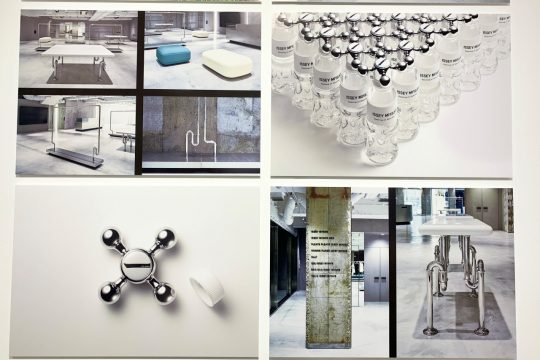 On the other hand, at Creation Gallery G8, which exhibits about 200 general works, I have the impression that there were many unique works. 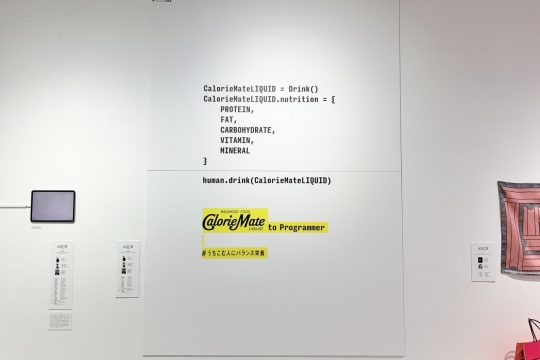 First of all, here is "Otsuka Pharmaceutical's" Calorie Mate to Programmer "poster, website" .

It is a novel work that appeals to a limited number of programmers who tend to lack nutrition, and may not even be noticed as an advertisement to those who do not understand. 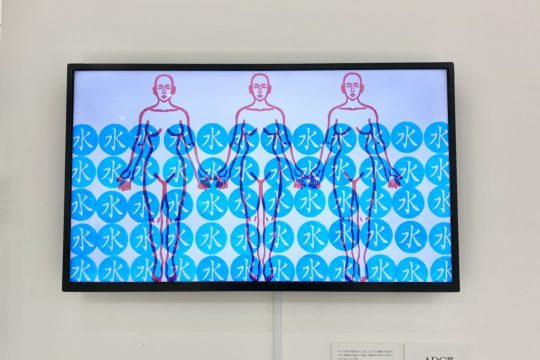 "Shachihata's" Inkage Mansaishi Foresuto "Web Movie" is a stop motion movie that creates the charm of "X Stamper", a penetrating stamp that does not require a stamp pad, which has been the driving force behind Shachihata's growth. It is a human drama that expresses the conflicts and challenges of the main characters of the comic masters by comparing the imprint to a person. Of course, it has the power of voice, but it skillfully conveys the situation and emotions of a person by changing the size and color, and the movement of shadows. It was a work that felt a completely new possibility of hanko. 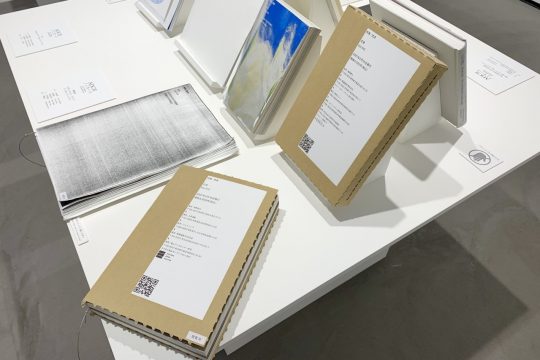 The book binding of "Book & Editorial of Hakuhodo" Advertising Vol.413-415 "" vol.415 is cardboard. It has a perforation, and you probably break it yourself and read it. It's named after the issue that features "distribution" of what happens from the creator to the recipient of a product or work. The sticker (?) On the cover shows the address of the company involved in the process from bookbinding to sales.

In what condition will this be delivered when mail-ordered? Is it still in cardboard? I'm curious … 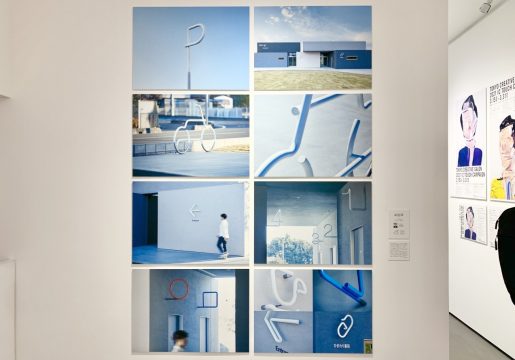 There are many eye-catching exhibits other than unique works. For example, the one that attracted me most at the venue was "Environmental space of my CLINIC" my CLINIC "" . It is a sign system made of a single pipe, but of course the sign is easy to understand, the cleanliness required of the hospital, the simple yet original modeling, and above all, the fashionable part is wonderful. You can hear the voices of the local residents saying, "I like the hospital over there." 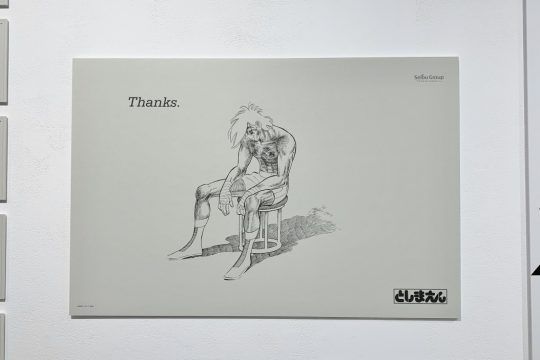 Unfortunately, in August 2020, the last "Toshimaen" Toshimaen Last Advertisement Thanks. "Newspaper advertisement" sent by Toshimaen, an amusement park that closed its curtain in 1994, also won the ADC Award. After the battle, I just added a word "Thanks." To Joe's too famous scene that burned out in white. The figure that praises a smile that seems to be satisfying on the face while being relaxed. A cool goodbye that doesn't say much, but is filled with the feelings of the Toshimaen staff. Many people should have been stimulated by this advertisement. 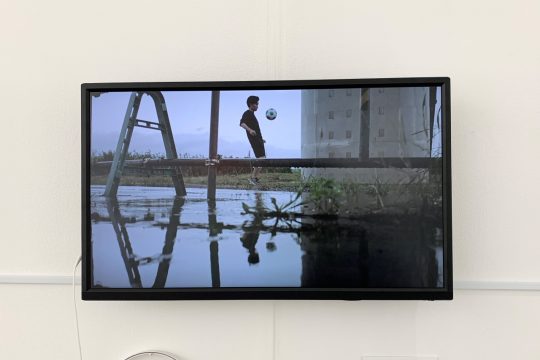 The summer of 2020, when sports competitions were canceled one after another due to the corona. 《Otsuka Pharmaceutical “Calorie Mate“ 2020, Summer, Club Activities ”Web Movie” that reflects the realistic appearance of club members who are worried, but look forward while thinking about their friends and devote themselves to what they can do now. In addition, the problems of Japan's gender gap were introduced in a true story, and the importance of caring for the potential of women was expressed in overlapping palm graphics, such as "Newspaper advertisement for POLA International Women's Day" , which reflected the social situation. Impressive works were also seen.

I have introduced the exhibited works so far, but before visiting the two venues, I vaguely imagined "what kind of work was selected as a" good work "? I wonder if there is something in common." rice field. However, looking back, I could not find a special direction such as "This is the trend of advertising and graphic design!". (Maybe I just couldn't see it because I was an amateur …) I wonder if that's the case in the first place. It seems that various studies are required.

However, there were various works that I had seen and works for the first time in this exhibition, but there is no doubt that all of them were more or less attractive, or that they had the appeal of stopping and appreciating each one! Normally, it is unlikely that you will be able to see such excellent advertising and graphic design works at a glance, so if you take this opportunity to explore the commonalities of the works that you have stopped by, you will likely discover something new. People in creative professions will surely be inspired.

From 18:00 on November 19th (Friday), as a related event, a talk event on the theme of "design dynamism" by Grand Prix winner Kashiwa Sato and ADC member Kazunari Hattori will be held on 11th. From 19:10 on November 24th (Wednesday), the winners and production staff talk events of "Suntory" Natural Water 2021 "", which won the ADC Award, will be delivered online.

The "Japanese Art Direction Exhibition 2020-2021" has passed the middle of the session, and there are only 10 days left. If you are interested, please come and visit us as soon as possible. 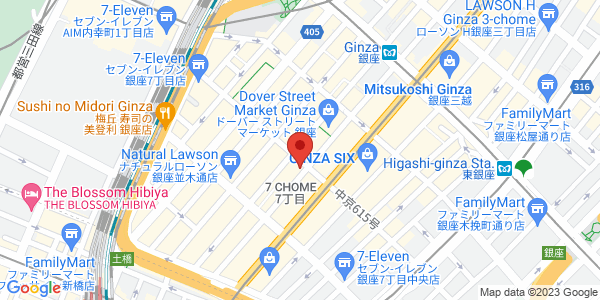 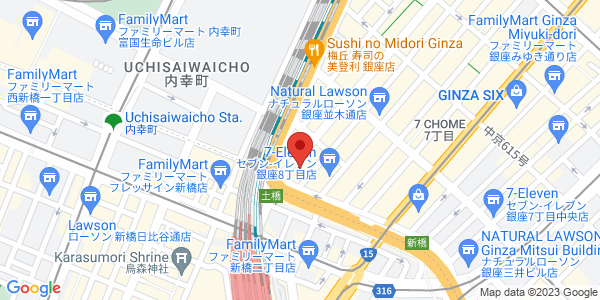