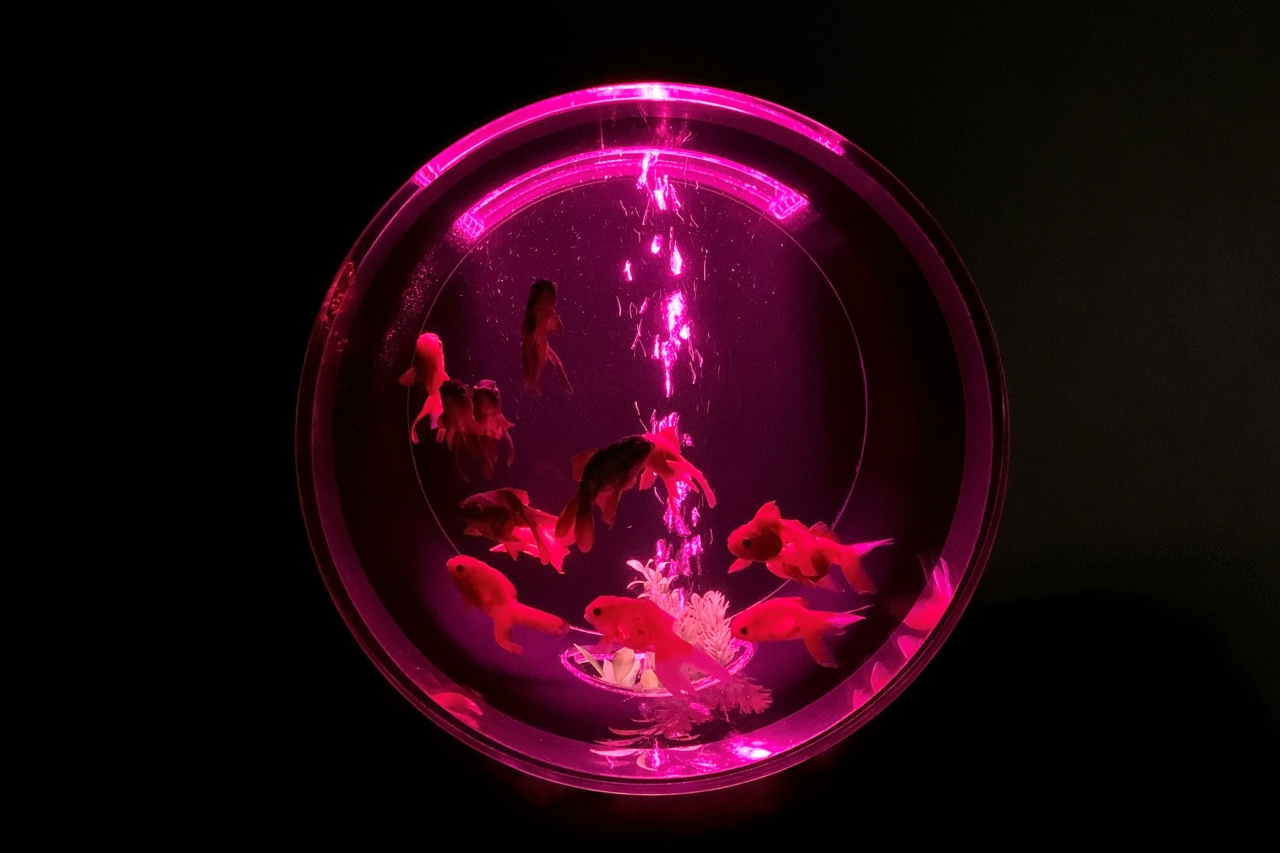 "Art Aquarium Museum GINZA" , where you can enjoy goldfish swimming in a beautiful aquarium with the production of light, sound and fragrance, opened on May 3, 2022 on the 8th floor of the Ginza Mitsukoshi New Building!

Since I participated in the preview held the day before the opening, I will report on the situation of the venue. 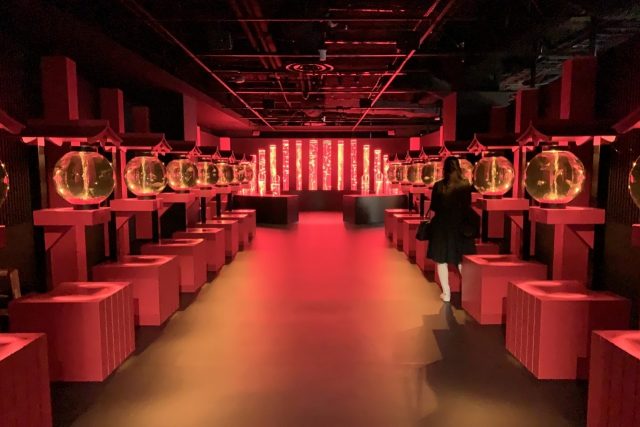 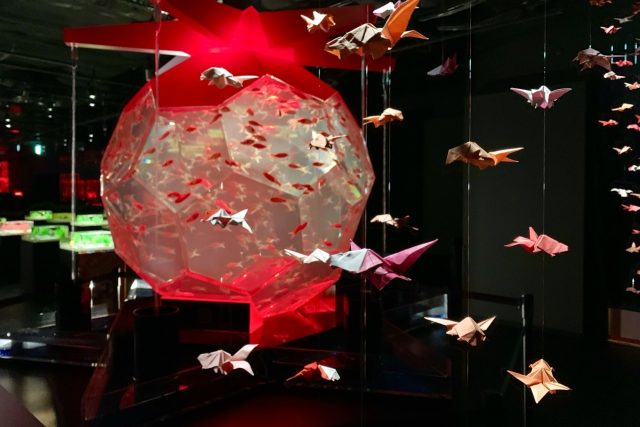 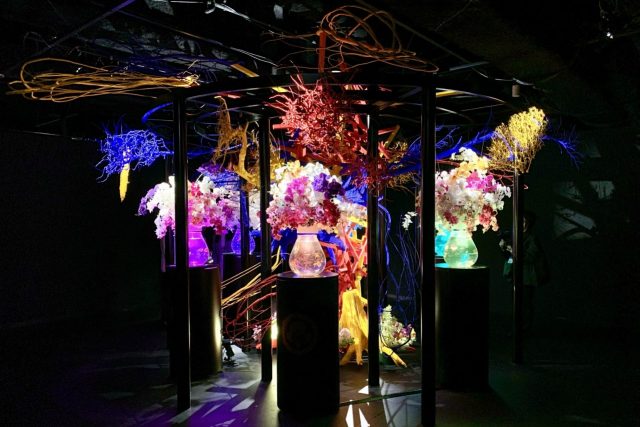 Art Aquarium is an exhibition where you can enjoy a fantastic Japanese world view specializing in goldfish art . Since it was first held in 2007, it has held exhibitions for a limited time both in Japan and overseas, and in 2020, it will open a permanent museum called "Art AQUARIUM Museum" in Nihonbashi, Tokyo. Throughout the year, we have provided visitors with seasonal experiences.

The theme of "Art AQUARIUM MEXT GINZA", which was relocated from Nihonbashi to Ginza and reopened, is "Hyakka Ryouran-Evolving Art-" . Many new works have appeared in the venue where the gorgeous fantasy world where colorful flowers are in full bloom, and the popular works that have been exhibited so far have also been upgraded!

When I asked Mr. Takumi Hasegawa of Amuseum Parks Co., Ltd., who worked on the development and design of the facility, he said, "In the past, Art Aquarium regarded the aquarium as an art work and looked around it, but this time. The big difference is that has evolved into a hands-on and immersive work that is one work including space . "

I visited the venue of "Art AQUARIUM Museum GINZA"! 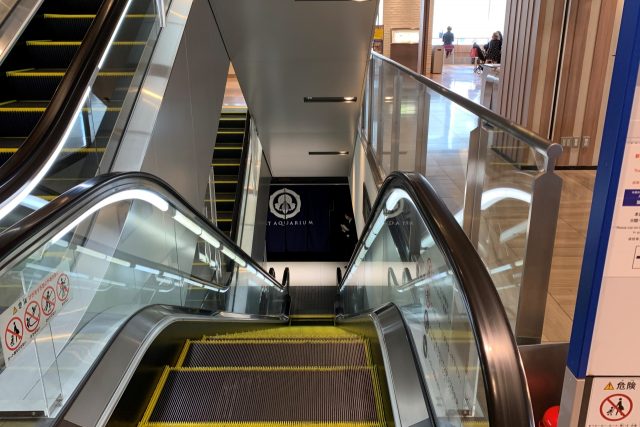 Take the escalator on the 9th floor to enter.

The venue itself is on the 8th floor of the new building of Ginza Mitsukoshi, but admission had to go up to the 9th floor and get off on the escalator. 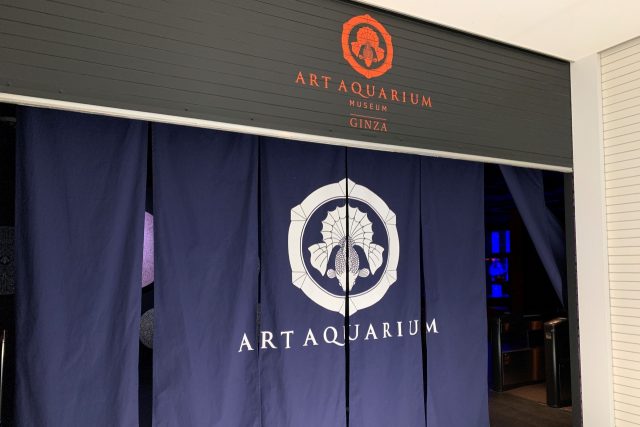 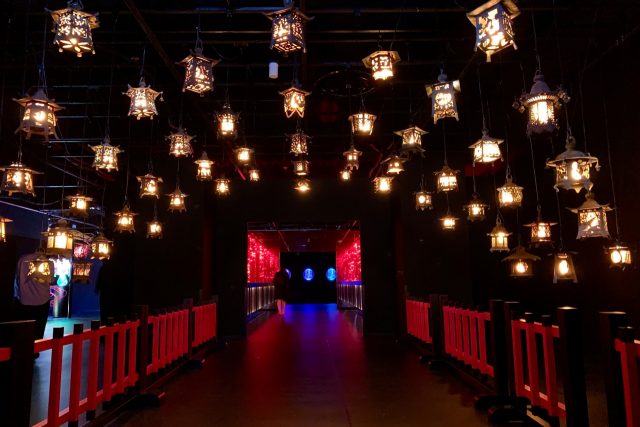 After passing through the noren at the entrance, the historic hanging lantern group "Ginza Manto lantern", which the museum has collected independently, welcomes visitors. Following that is the spatial work "Goldfish Corridor," which expresses the corridor found in temple and shrine architecture. Cylindrical aquariums where many goldfish danced lined up in an orderly manner and were lit up in various colors. It feels like you're stepping into the world of someone who isn't a human being, and you'll feel better. 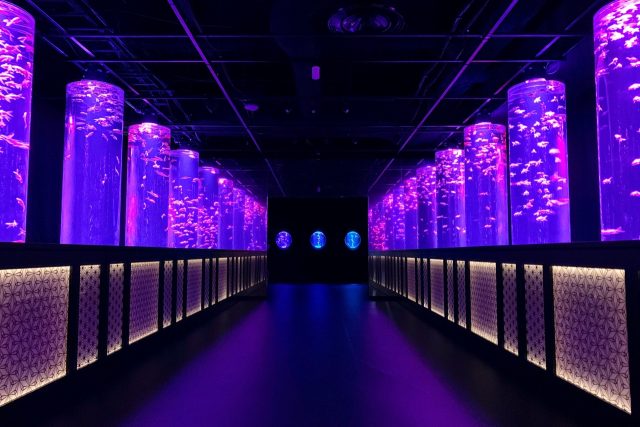 Large columnar aquariums have existed in Art AQUARIUM so far, but when arranged in such a corridor, the atmosphere is different and wonderful.

The table on which this cylinder was placed was a mirror, and when I looked into it, the cylinder was reflected and continued to the bottom of the ground, or I was drawn in by the illusion that it was floating in the air. This is what an experience-based / immersive work was like. 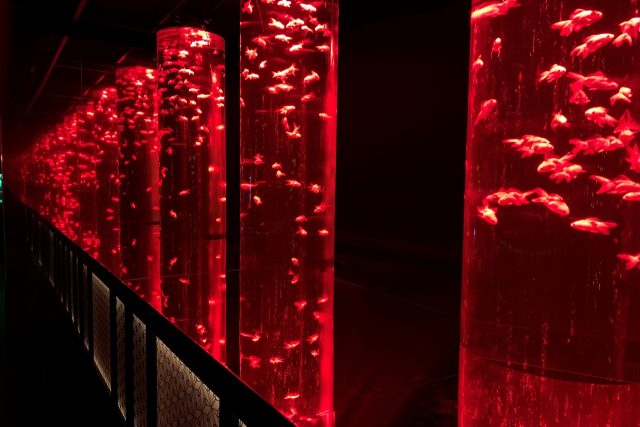 Delicate and mysterious original music by composer Cornish was played at the venue, and at this stage, I was already able to fully enjoy the extraordinary atmosphere. 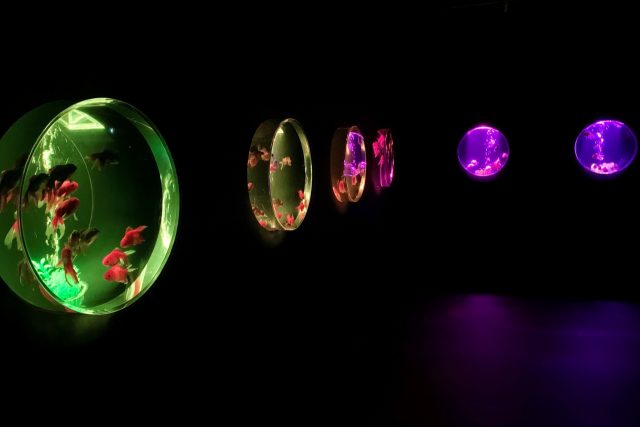 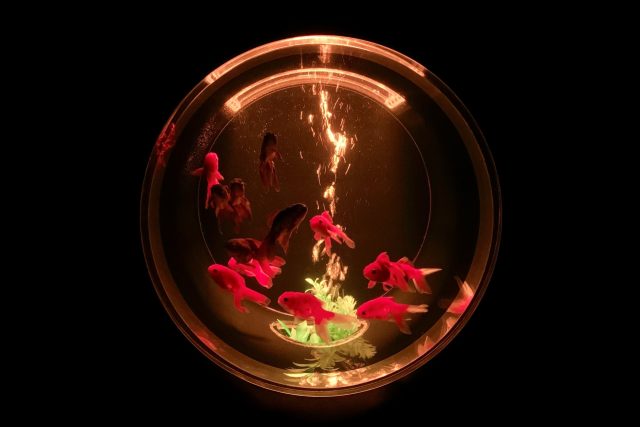 Next is "Goldfish Collection". It is a familiar exhibition at Art Aquarium, but the light production is new. As you proceed while being healed by the living art of goldfish dancing gracefully one by one, the spatial work "Goldfish Waterfall" appears. 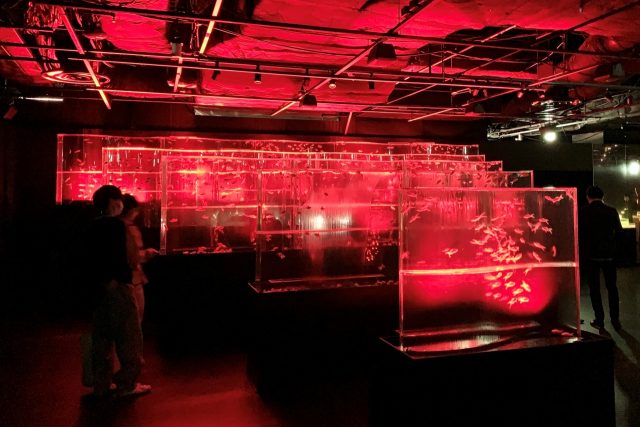 As the name suggests, it is a moving work with the image of a waterfall, and water tanks with different widths are lined up with steps and water is flowing from the top. By illuminating the flowing water gently dripping from the aquarium with a faint light, it gives a quiet and solemn impression. 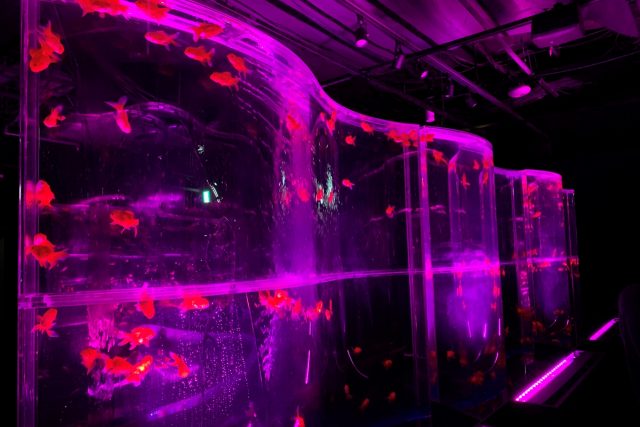 It's nice to watch from the front, but when you pass between the curved aquariums, the flow of light and water sparkles, and I felt more beautiful. It's cool to the eyes, and it's a perfect exhibition for the coming season.

The following "New Goldfish Review" is a square renewal of the "Goldfish Review" that had been developed in a circular aquarium. We introduce the goldfish varieties that have continued to increase due to breeding in 24 aquariums. 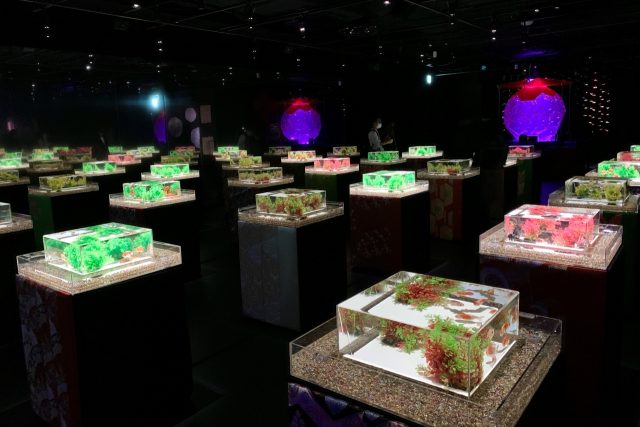 The reason why the space seems to expand infinitely is because of the mirrors placed on the left and right sides of the space. It seems to express the infinite possibilities of goldfish varieties. This is a small space on the 1st floor of the Ginza Mitsukoshi New Building, but I don't feel the space because the mirrors do a good job in various places. 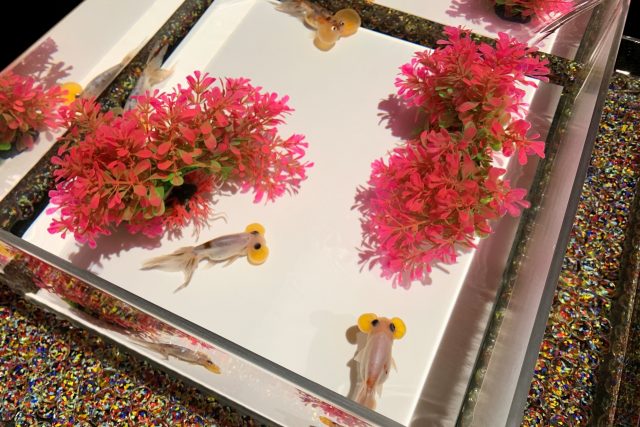 It is fun to be able to observe the appearance of goldfish up close from above, just as you would evaluate a goldfish in the "New Goldfish Review". I thought that the upper part was also glass, but the appearance of the water filling up to the edge of the aquarium just looked like smooth glass. Be careful not to bring your face too close to the surface of the water when looking into the goldfish.

Some varieties have a surprising appearance, "Is this child also a goldfish !?" Please look for your favorite. By the way, it seems that there are about 60 kinds of goldfish in the whole venue. 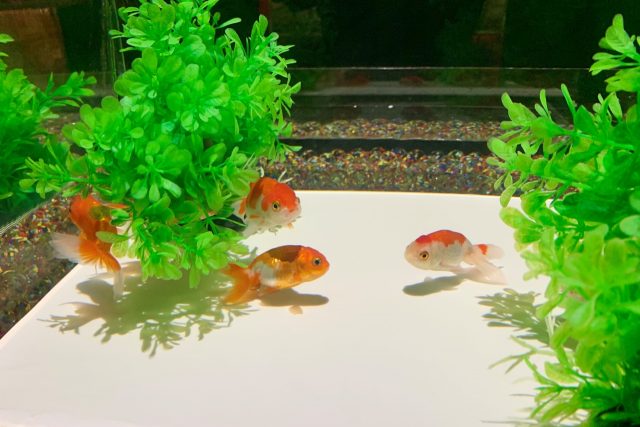 "New Goldfish Review" Hiding and flocking. If you're lucky, a goldfish may come out on the surface of the water. 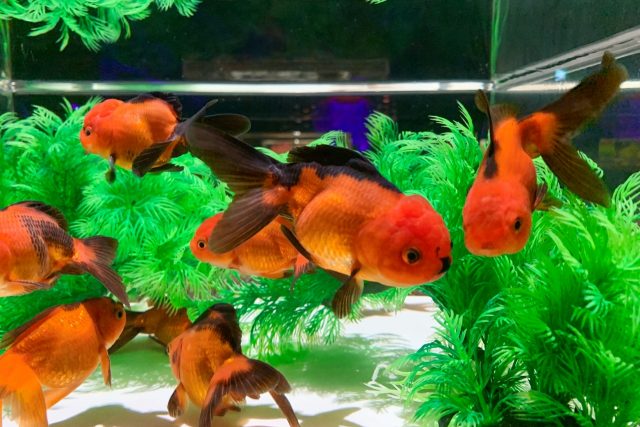 "New Goldfish Review" I found a cute girl with a pattern like eyebrows. Gradually, I can distinguish my face and I feel more attached to it.

Behind it is the masterpiece "Origami" with an origami motif. It's a form reminiscent of the popular Art Aquarium "Oiran" series. 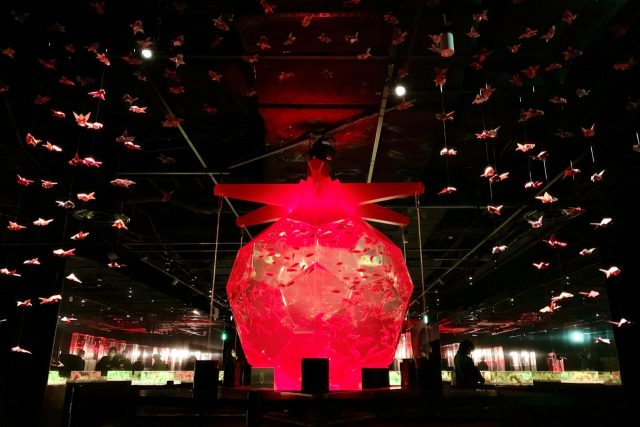 A lot of origami goldfish are hung on the left and right of the aquarium, but is this a production that makes the space itself look like a water tank, or makes you feel like a goldfish is swimming around you? The beautiful and mysterious atmosphere is irresistible. 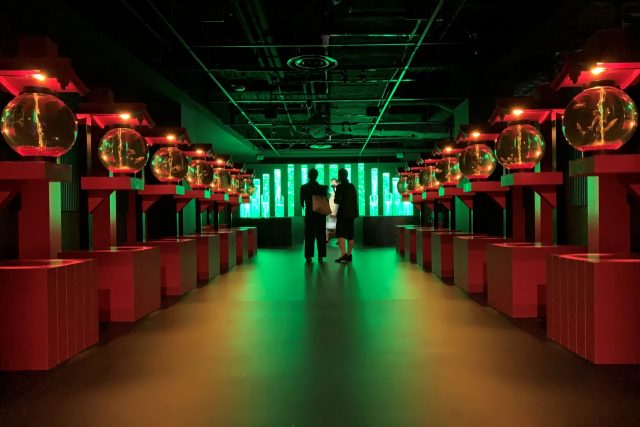 In the following area, Art AQUARIUM's first aerial work "Lantern Rium", which is based on the image of festival lanterns, appears. Beyond the lanterns, you can see the mysterious sight of the "goldfish bamboo grove". 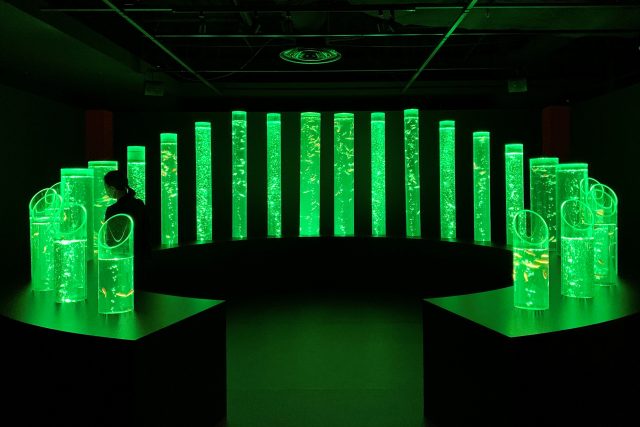 Two types of cylinders were lined up, one for the goldfish to swim and the other for the sparkling light bubbles, and the expression was different from the previous "goldfish corridor". Since the water tank is designed like bamboo, the green looks nice, but the impression of the space changes as the colors change to red, purple, and blue.

At the timing when the aquarium of "Goldfish Bamboo Forest" shines brightly, I took a selfie without using a smartphone flash or night mode, but I was able to take a selfie so bright that I could see the expression. The venue has a bright area and a dark area, and the amount of lighting depends on the timing, but "Goldfish Bamboo Forest" may be an environment where it is easy to keep a distance from other visitors and it is relatively easy to shoot. 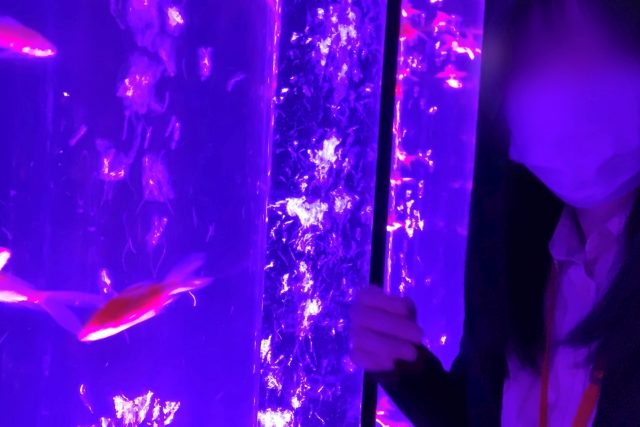 Taken with a smartphone and no flash at "Goldfish Bamboo Forest". (I'm sorry I couldn't frame in the goldfish well …) 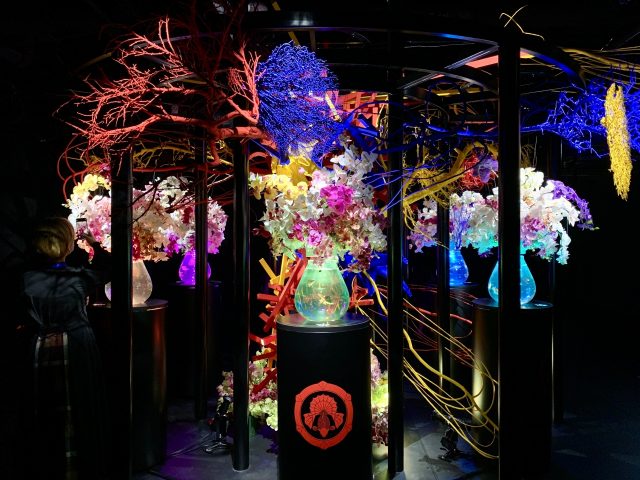 "Flower Rium" 360 degrees It will be a picture no matter where you look at it.

The small world of goldfish that looks like a vase is scaled up by Mr. Kariyazaki. The Japanese art of ikebana and goldfish is in perfect harmony, and I forgot the time to see the bold yet elaborately constructed beauty.

At the end of the exhibition, there is also a shooting spot called "Circular Window Digitalium". There is a transparent organic EL that moves the goldfish according to the movement of the person standing in front of you, so please set your smartphone and take a commemorative video. 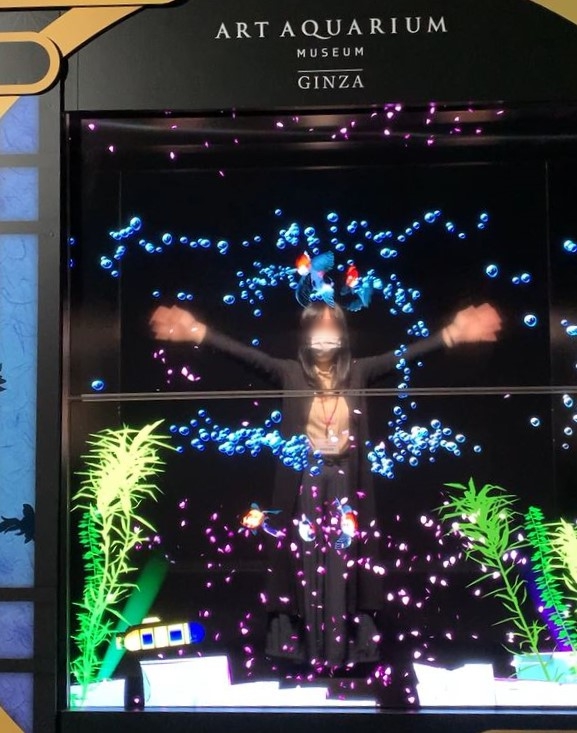 "Circular window digitalium" There is a dedicated stand on which you can install your smartphone, but be aware that if the installation is appropriate, it will shift like this!

In addition, illustrations drawn by top illustrators on the theme of Art Aquarium will be exhibited at the venue. It seems that limited prints and limited NFT art will be on sale in the future. Not only can you enjoy art, but you can also buy it, which is a point that has evolved in "Art AQUARIUM Museum GINZA". 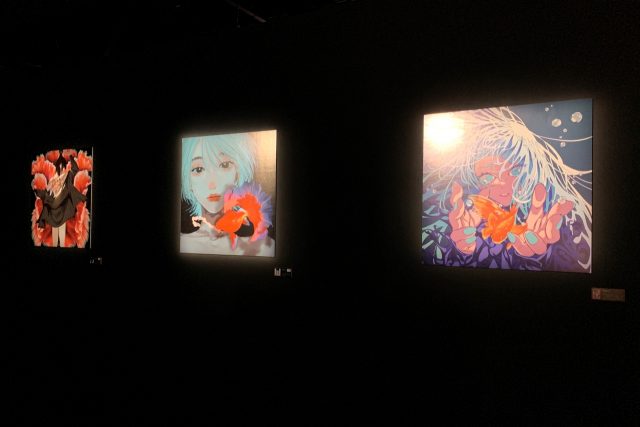 How about goldfish health care? I asked the person in charge of facility development.

As for the impression of experiencing "Art AQUARIUM Museum GINZA", the scale itself was smaller than the venue of Nihonbashi, which was the largest exhibition ever, but it was quite impressive. (Because I was wearing a mask, I regret that I didn't know what the scent of the venue was like …)

Above all, it is impressive that the goldfish were swimming freely !

Immediately after the museum opened in Nihonbashi in 2020, various negative topics about goldfish health management came up, and I was wondering what it would be like at this opening.

According to Mr. Hasegawa, who was in charge of facility development, "At" Art AQUARIUM Museum GINZA ", the environment of all the aquariums is thoroughly maintained in a state where the burden on goldfish is small, and it is possible to always respond according to the situation. We have specialized bio-management staff and backyards. "

No matter how much goldfish were born for ornamental purposes, I once thought, "It looks like it's going to be painful …" in the past Art AQUARIUM, which was clearly placed in a small space to please people. Therefore, I was very relieved to receive the words that I made use of my reflections up to the last time and improved various problems, and to see the goldfish actually swimming vigorously.

Some may feel that they wanted to see a gorgeous sight of more goldfish swimming, but this exhibition, which takes into consideration the health of the goldfish and allows you to see the beauty of the goldfish itself, is much longer than before. I find it attractive. 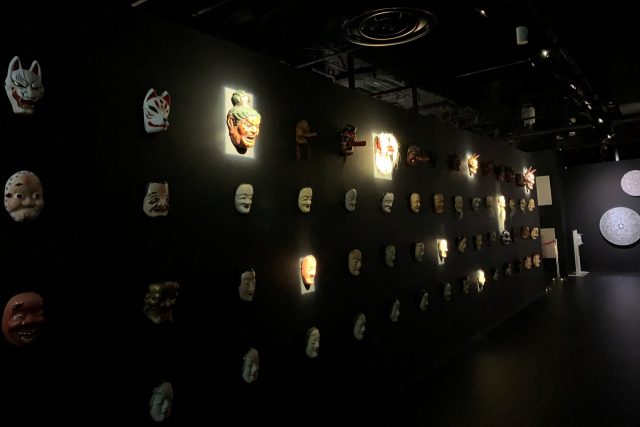 In addition to the Art Aquarium, Japanese beauty such as masks and goldfish Raden colored the venue. 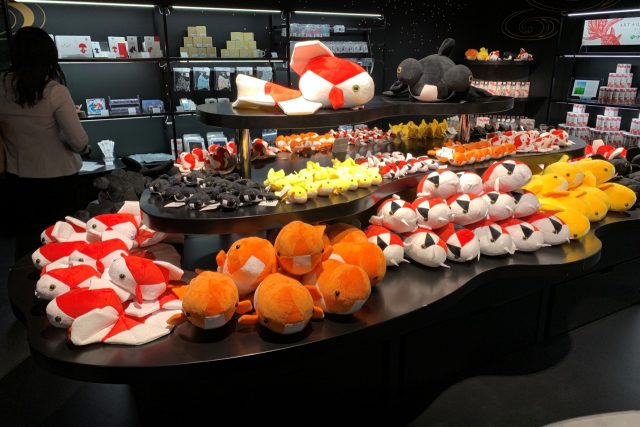 There are many products that can only be obtained here in the souvenir area. Check it out!

* The content of this article is as of the date of publication. Please check the official website for details as it may differ from the latest information.

<Past coverage articles>
[There is a real food report] A new sweets spot is born in Ginza! "GINZA SWEETS MARCH" is the first store in Japan and the first in Tokyo.

[Interview report] Special exhibition "Delicious time in Sylvanian village" I faint in agony with the loveliness of a baby dressed as a bakery …! Held in Matsuya Ginza (until March 21st) 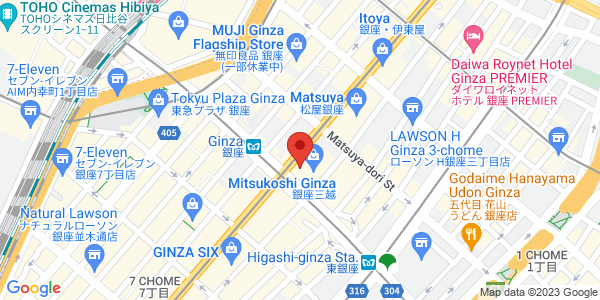